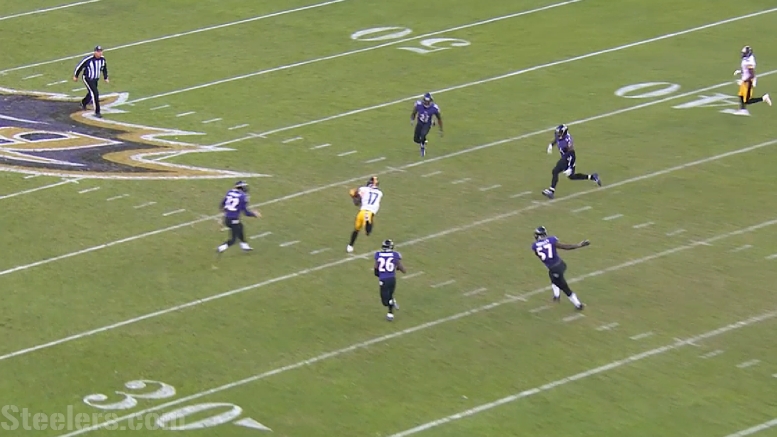 Pittsburgh Steelers wide receiver Eli Rogers missed all of his rookie season—even the preseason, so when he showed up in the 2016 season opener with six catches and a touchdown, it was kind of exciting about the potential that they may have been able to uncover from the undrafted free agent pool as a ready-made contributor.

But Rogers has for the most part been missing in action since then—that is, until about the last five minutes of Sunday’s game, during with Ben Roethlisberger turned to him early and often after not targeting him most at all prior to that.

Rogers’ first catch came a bit earlier than that, with nine and a half minutes to go, on which he caught a pass for 10 yards on third and 13. At this point, the Steelers were already in four-down territory, so getting 10 yards on third down is a win. Working from the outside in and creating some separation at the top of his route, Rogers sat 10 yards out and caught the ball.

Not all plays in his direction were successful, however. Roethlisberger was off-line to Rogers on all four of the incomplete passes in his direction. The second of those incompletions came with 5:32 left on second and 21. After Rogers gained separation at the top of his route—again—Roethlisberger misfired behind his target and nearly let the ball be picked off by the undercutting slot defender.

But Roethlisberger made up for it a play later—with a great amount of help from his target—when he hit Rogers on a nicely-thrown ball in the midst of no less than five defenders. Talk about finding the zone. But it took a fantastic catch from Rogers to haul that pass in.

Later on that same drive, near midfield, Rogers worked out of the right slot to run a corner route, taking a stutter step inside at the stem to gain separation. Roethlisberger found him on the fading target outside the numbers and Rogers was able to turn upfield for extra yardage. But Roethlisberger also missed him on a similar throw on the previous play.

Two plays after the previous play that we just looked at, Roethlisberger looked in Rogers’ direction once again, for the third time in four plays, but it was also the second misfire in that sequence.

This time, Rogers came out of the left slot, and was able to work his defender inside out, cutting to his left only to work back toward the middle of the field behind him. He got his numbers where Roethlisberger could see him, but the pass was high and Rogers could only tip it, nearly intercepted.

What I took away from this was a player who was consistently giving his quarterback the windows to throw, provided that he was able to hit them. unfortunately, Roethlisberger was often unable to fit the ball into those windows on Sunday.