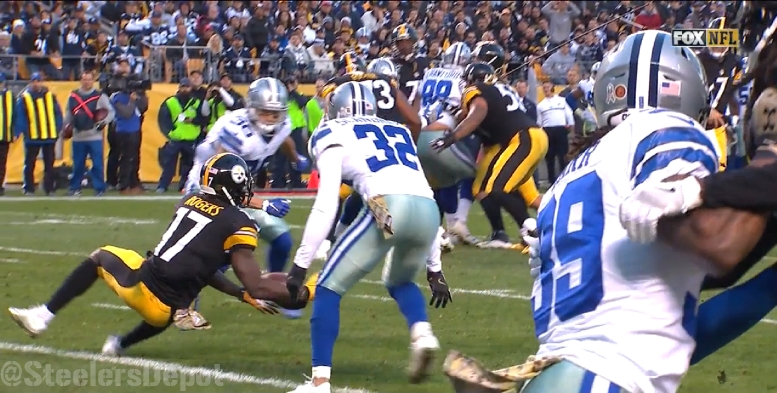 The Pittsburgh Steelers are looking for wide receivers, with a number of injuries at the position. They have Antonio Brown, of course, who is leading the league in receptions and is in the top five in receiving yards and receiving touchdowns. But with three guys out of six dealing with injuries, Eli Rogers is their closest to a number two right now.

Which is probably why he say a lot of snaps on Sunday and the third-most targets on the team behind Brown—who had a ridiculous 19 targets—and Le’Veon Bell. Yet he only had six targets, which really isn’t a lot of usage for your number two guy. But he has shown the potential to merit more looks going forward.

Rogers’ first reception of the game against the Cowboys provided a jumpstart to Pittsburgh’s second drive. On a the second play of the drive from the 30-yard line, Ben Roethlisberger got the opportunity for a free play when a defender jumped offside. As he always does, he looked down the field and found Rogers open with the slot defender blitzing on the play—the man who was offside. A quick cut inside and the receiver was open for 22 yards and in Dallas territory.

Oh, and by the way, he also finished out that drive by bailing out his quarterback and virtually picking a ball off the ground for a touchdown. This was Rogers’ second touchdown of the season, and the second one that was a bit unusual, the first coming off a deflection.

On this occasion, Rogers was the left middle receiver with Bell in the slot beside him. Faking to the flat before pivoting back inside and creating a huge window in a short area, Rogers was able to make a fantastic adjustment to a ball thrown clearly behind him, holding on through contact with the ground for the score.

With under three minutes to play in the first half and Pittsburgh looking to bolster a slim lead, Roethlisberger looked for Rogers on second and nine. With two receivers bunched behind the tight end on the left side, Rogers took the inside route for the easy pitch and catch first down. He has had a few of these this year. At some point they have to start breaking.

The second-year receiver also nearly set Pittsburgh up with a good field goal opportunity at the end of the half with what looked like a 23-yard catch, but the defender did a good job of playing the pocket and knocking the ball loose—not, I would point out, before first hitting Rogers in the facemask with his hand.

Rogers also had another four-yard reception in the first half. For some reason it seems that the vast majority of his attention comes by halves. Last week it was the second half, this week the first. His lone second-half target on Sunday was, unfortunately, a drop, which was likely the difference between third and goal from the seven or the three.

And here is a still of that drop: 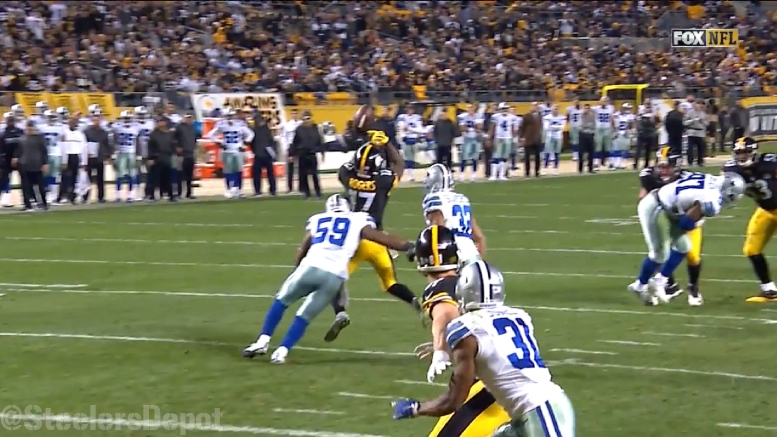 That was Rogers’ third drop of the season, though we have seen drops from Brown as well. I still think that, especially given the wide receiver situation, Roethlisberger needs to be giving Rogers more opportunities, as he seems to move away from him for long periods of time.