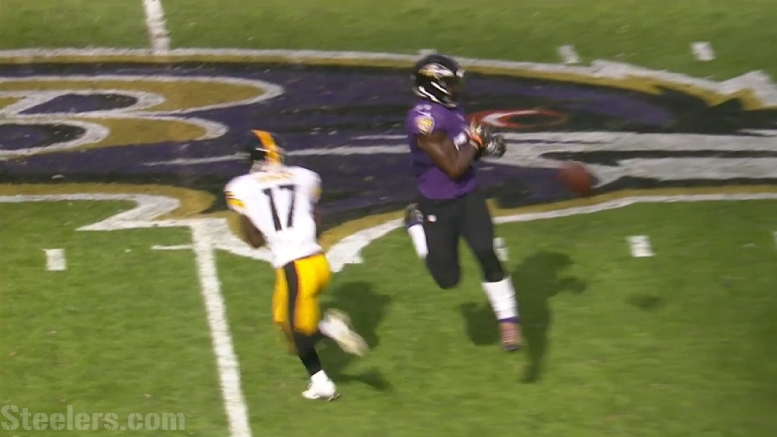 If you read this website, then there is a good chance that you follow our Twitter account, and you may have seen something that we Retweeted yesterday, which noted that Pittsburgh Steelers quarterback Ben Roethlisberger has thrown 14 ‘pickable’ passes this season, tied for the most in the NFL.

To be quite honest, in Roethlisberger’s first game back from injury, he threw several passes that could have been intercepted, many of which, no doubt, contributed to his total of ‘pickable’ passes thrown on the year, so we are going to take a look at them here.

The first such pickable pass came about five minutes into the game. Roethlisberger was targeting Darrius Heyward-Bey on a deep pass on third down and five down the right sideline. What he didn’t see was the safety dropping back deep before the snap and rotating over in Heyward-Bey’s direction, very nearly intercepting the pass.

Relatively early in the second quarter, Roethlisberger looked in Heyward-Bey’s direction again on a deep target, on third and 18. While this pass was not a near-interception, it was a near-hit that he couldn’t quite connect on that could have changed the complexion of the game.

But the play right before that should have been intercepted. It was a play on which he was looking for Eli Rogers—which you will see is a theme—on second and 18. What he did not see on this play was the drop of the inside linebacker, who rotated into the zone covering Rogers’ route. This was a sure interception dropped, a clear-cut, textbook example of a ‘pickable’ pass that you don’t see on the stat sheet.

At the start of the fourth quarter, Roethlisberger looked to check down to Le’Veon Bell, but the outside linebacker was right there in the throwing lane. Had his momentum not already been carrying him away from the play, he may have easily had an interception. Instead, he just had a deflected pass.

With five minutes remaining in the game, Roethlisberger looked in the direction of Eli Rogers on an intermediate route, curling to the middle of the field, but the slot cornerback read the play well enough that the quarterback’s inaccurate pass that was a few yards behind where it should have been was nearly intercepted.

Later on that same drive, with Roethlisberger targeting Rogers again, this time down the field, he misfired high, and Rogers was only able to get an outstretched hand on the ball. The resulting tip landed in the hands of the safety for what should have been an interception.

So…yeah. This stuff needs to get cleaned up. Otherwise panic will be justified. Or at least a wholesale lowering of expectations.