The Pittsburgh Steelers season is hanging in the balance. Make no mistake, this team has major issues that seem to go beyond the football field in many ways. We will save that debate and my feelings on Mike Tomlin for another article. Right now, it’s important to remember that last season they were also 4-4 at the halfway point after an ugly loss to the Cincinnati Bengals with quarterback Ben Roethlisberger returning from injury. They finished 6-2 over the final eight games and were a play or two away from the AFC Championship game. They have proven that they can right the ship.

Sunday’s matchup against the Cowboys has all the feels. The historic rivalry will be a true measuring stick of how good (or bad) this Steelers team is. Seeing the Black and Gold on the same field as the Silver and Blue is fantastic. No matter what the records, the stakes are raised, but even more so with the Cowboys being the best team in the NFC. The playoff push starts now for the Steelers and the AFC North is certainly still wide open.

Once again, this Steelers team will go as Big Ben goes. As has been discussed in this article in the past, the home/road statistical splits are drastic for Roethlisberger. He performs so much better at Heinz Field than he does on the road. These are the spots where you want to get in on the Steelers passing game.

Check out how much better Ben is from a statistical perspective at home over the past 2+ seasons. 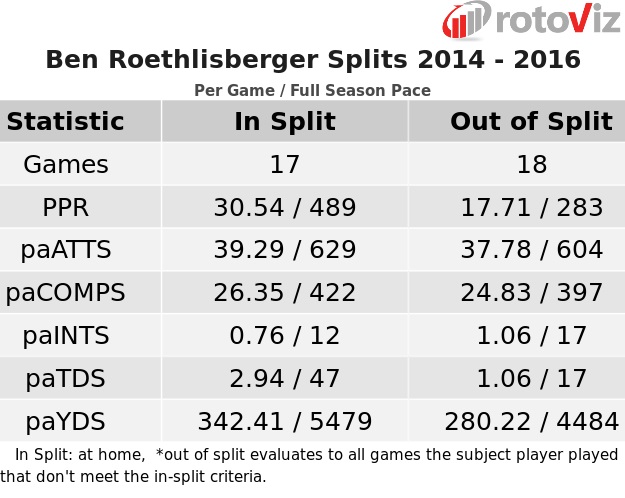 I think Ben and company are in an excellent bounce back spot this week against the Cowboys. Over the years, these are the games that the Steelers get up for. (Another issue, I know) As seen in the chart above, Roethlisberger passes for nearly 60 more yards at home, nearly two full touchdowns more and averages nearly double the amount of fantasy points.

Many may be scared to roster Big Ben this week, but my recommendation is to play him heavily on DraftKings and Fanduel and expect a big game from him in your season long leagues. Dallas has a couple major injuries in their secondary that Ben will be sure to exploit. Both safety Barry Church and cornerback Morris Claiborne are out for this game.

Dallas is solid against opposing quarterbacks from a fantasy perspective, surrendering only 256.5 passing yards per game to go along with 1.5 touchdowns. Roethlisberger has shredded solid defenses before, and I expect him to do this same in this spot. I don’t often project Ben for such a high touchdown upside but I believe that the Steelers will have to throw a bunch with how solid Dallas is against the run.

The wide receivers are banged up. Both Markus Wheaton and Darrius Heyward-Bey have already been ruled out for this game. That leaves only Cobi Hamilton behind Antonio Brown, Sammie Coates and Eli Rogers.

If tight end Ladarius Green returns from injury, it could be a much needed boost for the Steelers passing game.

Antonio Brown is in a great position to have a monster game here. I think AB will get peppered with targets here as the Steelers look to spread out and move the ball against this Dallas defense. Brown is currently third in the NFL with 10.8 targets per game and will be facing a Dallas secondary that is allowing 36.5 PPR fantasy points per game to opposing wide receivers.

Sammie Coates is also in a great buy low position this week in daily fantasy leagues. With only 1 reception for 4 yards combined over his last three games, not many fantasy players will want to fire up Coates in this matchup. However, Coates is healthy and has a 15.5% target rate (targets per snap). That rate is the same as solid top wide receivers like Allen Robinson and T.Y. Hilton. Coates could blow up again this week.

The third piece of this puzzle is Eli Rogers. When Rogers is involved, the Steelers seem to move the ball well in the passing game. He has been very effective in the slot and should be a very viable fantasy option this week in PPR leagues. Last week Rogers saw 10 targets that resulted in 6 receptions for 103 yards.

Jesse James is no longer a fantasy option in the Pittsburgh offense. With Ladarius Green possibly making his debut this week, it is interesting to note that Dallas has been generous to opposing tight ends, allowing 5.9 receptions and 58.0 yards per game. If Green plays, he may see 4-5 targets here but neither James nor Green is a viable fantasy option this week.

Le’Veon Bell was stifled last week against the Baltimore Ravens run defense. This week, Bell faces a Cowboys defense that is allowing the 5th fewest rushing yards with only 86 yards per game. Dallas is also best in the NFL, allowing only 0.4 rushing touchdowns per game. Bell is still valuable even in a tough rushing matchup because how involved he is in the passing game.

Dallas is allowing only 19.4 PPR fantasy points per game to opposing running backs but Bell is not just any running back.  Bell is 4th in the league with 23.8 touches per game and is yet to find the end zone this season. I believe this is the week that Bell breaks the plane and posts a very solid fantasy day for his owners.

Kicker Chris Boswell will forever live in infamy on the blooper reel after his pathetic onside kick attempt against Baltimore. From a fantasy perspective Boswell has been very quiet this season and is facing a Cowboys defense that only surrenders 6.1 fantasy points per game. If Pittsburgh wants to win this game, Boswell is best served kicking extra points.

As was mentioned in the open, the Steelers season is on the brink at the midway point of the season. Pittsburgh needs to start a winning streak this week against an extremely talented Cowboys team. I think Ben will put up huge numbers at home and the Steelers will just edge out the Cowboys in a classic showdown.