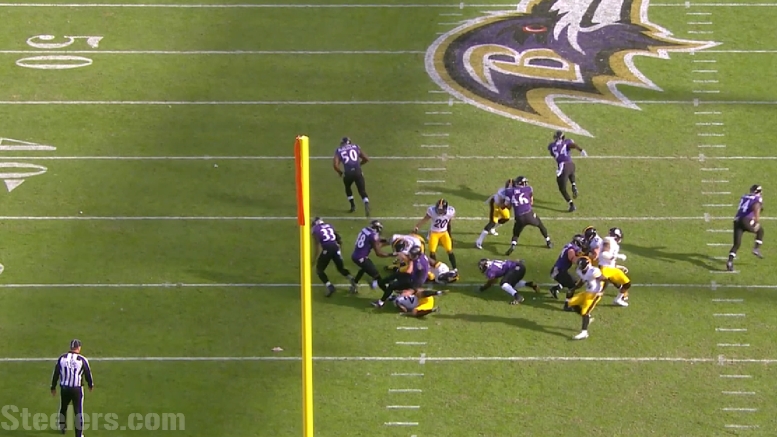 It’s almost hard to imagine a worse three quarters offensively than the Pittsburgh Steelers showed today, though a rebound effort in the fourth quarter at least made the final score competitive for just their second one-score game of the season. But if there was one persistent problem throughout the game, it was the alarming number of penalties.

And we now have to wonder if this is a trend that will subside or if it is a growing problem, as their penalties have been on the rise, and they had 10 in their final game prior to the bye week, with a wide variety of them.

Today, they stepped it up even higher, racking up 13 accepted penalties—plus two that were declined—for a total of 99 yards, a total that was competing, and often ahead of, the Steelers’ offensive output for the game until they finally showed some life in the fourth quarter.

Interestingly, the first 10 minutes of the game were even penalty-free, but once they started to flow, they came pretty consistently. Starting on their third offensive drive, the first two having gone without picking up a first down.

Naturally, the first time that they picked up a first down in the game, they managed to draw a delay of game penalty. After picking up six yards to make it second and nine, a false start made it second and 14. In essence, they needed to pick up 20 yards on that series for a first down. They got 16 yards.

Early in the second quarter, Le’Veon Bell was in the process of being tackled for a loss by a group of Ravens in the backfield when he was flagged for a face mask penalty. That put the ball from the 41—actual good starting field position—all the way back to the 26. Naturally, they promptly went three-and-out after that.

The Ravens drive that followed began with a defensive face mask penalty by the Steelers that moved Baltimore from the 13 to the 28. Two plays later, an illegal hands to the face was added on a two-yard run on second and six that would have set up third and four.

But the defense got the Ravens into a fourth and 16, only to see a neutral zone infraction then give way to a roughing the kicker penalty on the next play. The defense and special teams combined for four penalties on that possession alone.

Three Steelers penalties later, an illegal formation on the Steelers’ field goal blocking unit made a 54-yard attempt a 49-yarder. The Ravens made it, but even if they didn’t, Shamarko Thomas—who roughed the kicker—was offside on the make.

Sammie Coates even managed to be flagged for being offside on the third-quarter opening kickoff. And Chris Boswell was flagged for an illegal kick on an onside kick attempt. At a certain point, it has to almost become impressive the quality and quantity of penalties they can muster. But I’m not at that point yet. Things desperately need to be cleaned up.