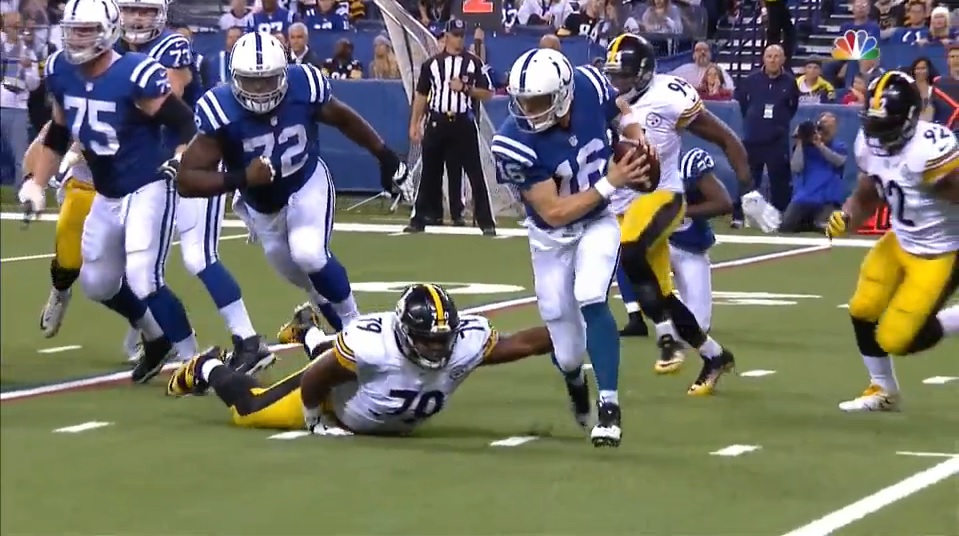 The Pittsburgh Steelers winning on the road by three scores? Now that’s weird.

– Let’s examine that question a little closer. It’s just the fifth time since 2010 the Steelers won a road game by 21+ points. Happened in Week One this year against Washington, once in 2014 vs Cincinnati, 2011 against Cleveland, and 2010 versus Tampa Bay.

First time they ever did it to the Colts’ franchise.

– Tweeted it out but if you didn’t see it.

– Roethlisberger is the first Steelers’ quarterback to throw 3 touchdowns in 20 or fewer attempts since Charlie Batch in 2010 against the Bucs. Roethlisberger had done it twice in his career, each coming in 2007.

– David Todd is getting credit for this one. As he pointed out, back-to-back games Le’Veon Bell had 120+ yard games without a single carry going for more than 12. That was his long last week and tonight.

– Antonio Brown recorded the first 3 receiving TD game of his career. First Steeler to do it since Jerricho Cotchery in 2013. Hines Ward did it once in his career and is the only other to accomplish that in the Kevin Colbert era.

Only one Steeler has ever done it twice in his career – John Stallworth in 1984 (both times). One of those came on November 25th.

Brown is the first Steeler to have three touchdowns in five or fewer catches since tight end Eric Green in 1990, who did it on four. Stallworth also did it on four on one of his occasions.

Brown is the first wide receiver league-wide on so few catches to do it since Brandon Marshall in 2014. Two tight ends, Tyler Eifert and Rob Gronkowski, accomplished it last year.

– Le’Veon Bell’s four receptions today were the fewest he’s had in a game since the Bengals contest last year, his final one of the season. He’s still on pace for 92 receptions.

– As far back as PFR’s research goes, which is 1994, no Steelers’ tight end caught two 30+ yard passes in the same game. Until Ladarius Green did tonight. Gains of 32 and 35. That’s why he was signed.

That was also the last time the Steelers’ secondary picked off two passes in the same game. William Gay had the other tonight.

– Javon Hargrave now has two sacks this season…something Cam Heyward and Stephon Tuitt never did in their rookie years.

He’s the first Steelers’ rookie DL to have multiple sacks in a season since Rodney Bailey in 2001. He’s the first rookie to do it back-to-back games since Brenston Buckner in 1994.

– Last one for you and my favorite.

The Steelers have not been sacked once in the past two games. That’s happened for just the first time since 2013. The first game was a Sunday afternoon game over the Cleveland Browns, followed up by a Thanksgiving night game.

This time, of course, was a Sunday afternoon game against the Browns and then a Thanksgiving night game. Weird.