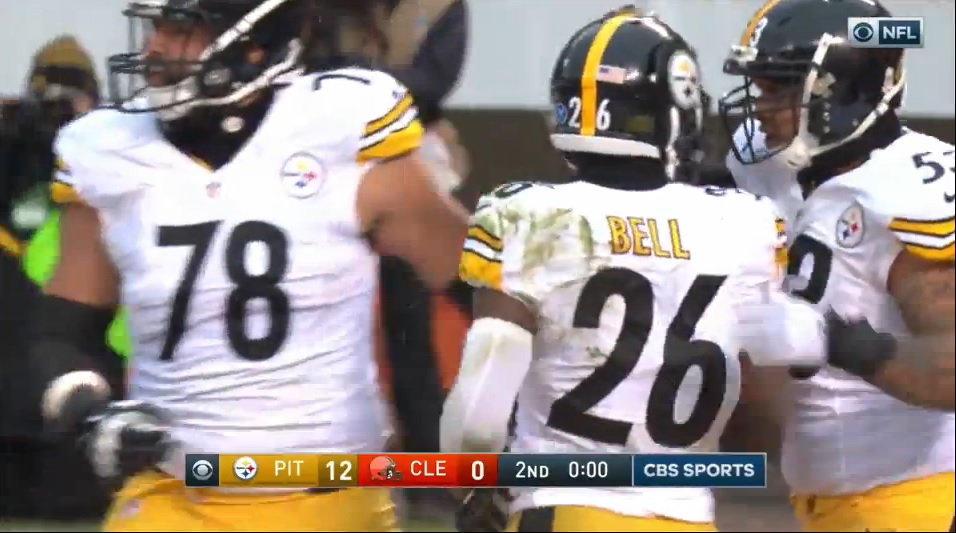 A Pittsburgh Steelers win may have been the weirdest thing of the day. Forgot what that felt like.

– Box score time. There hasn’t been a 24-9 regular season result in seven years when the San Francisco 49ers beat the Arizona Cardinals by that score.

The Steelers haven’t been involved in a game by that score since September 1st, 1996 in a loss to Jacksonville. Artie Burns was about 16 months old that day.

– This is just the second time in Ben Roethlisberger’s career he has attempted at least 35 passes and thrown for less than 175 yards. Just 167 which bests his previous career low in this stat of 174 in an 18-12 loss to the Cincinnati Bengals in 2009.

– Le’Veon Bell’s 36 touches today were a career high in the NFL. But that was child’s play compared to what he did in college.

He equaled or surpassed 36 touches five times with Sparty, all coming in his final year there. The most touches he’s ever had in a game is 50 against Boise State. 44 carries, 6 receptions.

Bell’s eight receptions today gives him 53 for the season. Which puts him on pace for 98 and 4th all-time by anyone out of the backfield. Incredible.

– The Steelers’ eight sacks today is the most they’ve had in a game since 2005 when they did so twice. Once in a 41-0 thumping of the…Cleveland Browns and another in a 27-7 win over the Houston Texans.

In that game against the Texans, Harrison had his second career sack. Today, he gets his 77.5. Pretty cool.

– The Browns’ 33 yards rushing is the fewest allowed by the Steelers since…November 15th, 2015 against the Cleveland Browns. Fun with symmetry.

Before that, the Steelers hadn’t stopped a rushing attack so well since 2012.

– Stephon Tuitt’s 2.5 sacks is a career single-game high, either in the NFL or college at Notre Dame. He had two sacks in a game five times entering today.

– Arthur Moats had more than one sack in a game for just the second time in his career. The other instance was in 2014, with Pittsburgh, when he picked up a pair against the Cincinnati Bengals.

– Burns has two interceptions this season. That makes him the first Steelers’ rookie cornerback to pick off two his first year since Chad Scott in 1997. Scott was previously the last first round CB drafted by the team.

The last rookie defensive back to have two in a year? Anthony Smith in 2006.

– Javon Hargrave is the first Steelers’ rookie defensive player, of any position, to score a defensive touchdown since Joey Porter, now coaching this staff, in 1999.

Per PFR, he’s the first rookie DL to do since Chuck Hinton in 1964. And only the third to ever do it in franchise history.

He’s the first 290+ pound rookie league wide to score since Sheldon Richardson in 2013.

– The Steelers had a 16 play opening drive for the first time since 2003. They also had to settle for a field goal that drive. In fact, eight of their last nine 16 play drives have ended in a result other than a touchdown. So don’t be surprised!

– Pittsburgh had three drives of 15+ plays today, the first time since at least 1998 they’ve done it thrice. Their previous record was two such drives back in 2010 against the New York Jets.

This is their fourth such drive of the year, equaling the total they had from 2013-2015.