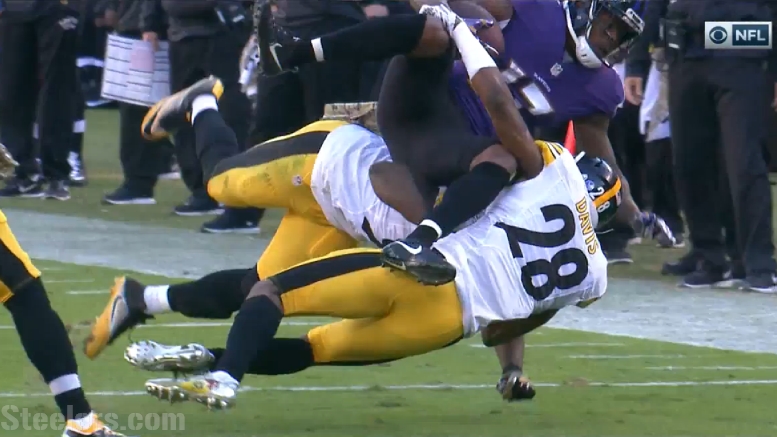 Earlier in the week, we brought you news that rookie safety Sean Davis split the free safety position on Sunday with veteran Robert Golden for the Pittsburgh Steelers, with Davis playing about 40 percent of the snaps, if my memory is correct, in a sort of informal rotation, which at times took place in the middle of a drive.

But it appears that the rotation has been by design, and that it might be here to stay, to hear Davis tell of it yesterday. In fact, it sounds as though the free safety position is now going to be yet another defensive starting position that is subject to a rotation.

And Davis thinks he has a chance of ‘starting’, such as that might mean much when it comes to rotating, as we see currently at the outside linebacker position, where both the left and the right position are rotated, and the player who doesn’t ‘start’ could see more snaps.

According to Mike Prisuta, Davis told him after practice yesterday that he and Golden are “splitting it 50-50”. He went so far as to say, “I guess however has a better week gets to start, then we alternate”. Which means that if the Steelers open a game in their base defense, they could have three rookies in the starting lineup between him, Artie Burns, and Javon Hargrave, who are the starting right cornerback and nose tackle now, respectively.

You will recall that Davis was already a de facto starter this season at another position, the nickel cornerback position. While the Steelers drafted him with an eye toward starting him eventually at safety, they also valued his athleticism and flexibility, and they had been giving him reps in the slot since the spring. When their projected slot cornerback got injured, they slid Davis into that role.

Of course, he gradually slid out of that role as well, as the coaching staff decided to start scaling things back, ideally to focus more on the safety position. Now that he is evidently going to be receiving regular playing time rotating with Golden at the free safety position, his focus would seem obvious.

Still, one wonders if he would be called on to play in the slot if William Gay were to miss a game. He was at risk of missing last week’s game. And they have no obvious backup to Gay in the slot, if we are being honest.

One also has to wonder at the wisdom of a rotation at the back end of the defense and the ramifications that may have. While communication is essential at all levels of the defense, it is imperative that the safety pairing as the last line of defense are on the same page.

The obvious long-term plan is for Davis to start, however. Getting him into a rotation with Golden is the first step in making that transition. They have already gotten Burns into the starting lineup. They are well on their way to transition to the next starting group. Now it is just a matter of raising their level of play.