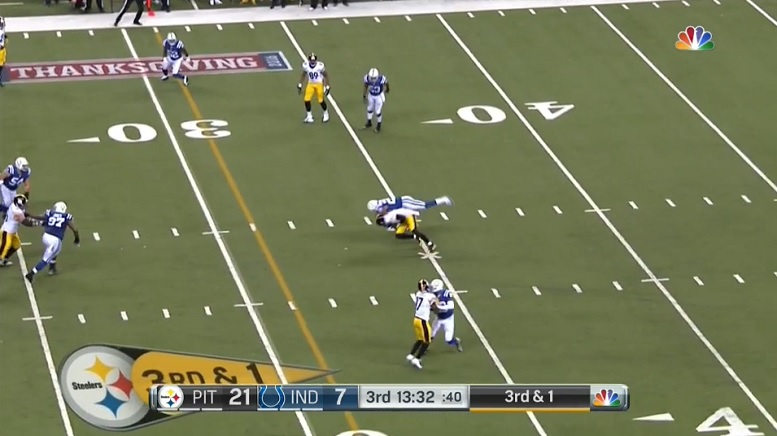 Pittsburgh Steelers wide receiver Cobi Hamilton only had one reception for 5 yards in the team’s Thursday night win over the Indianapolis Colts but quarterback Ben Roethlisberger views that lone catch as a significant one.

“Cobi, he had a third down catch, it was 3rd and 5, he was the third read, he was right over the ball, I threw it to him, he reached down with his big hands catch, got hit as soon as caught it and he hung onto it and got us a first down,” Roethlisberger said during his weekly Tuesday interview on 93.7 The Fan. “I mean, so minimal that most people don’t even remember that play, but that’s a huge play. It’s a third down conversion, we moved the chains, he gets hit as soon as he catches it.”

While Hamilton’s third down catch against the Colts did keep the Steelers opening offensive possession of the second half alive, unfortunately that drive ultimately stalled. It’s worth pointing out, however, that of Hamilton’s 9 total receptions so far this season that 5 of them have come on third downs and 4 have resulted in the chains being moved.

Since being signed off the Steelers practice squad several weeks ago, Hamilton has played a total of 221 offensive snaps in the six games that he’s dressed for. It will now be interesting to see if he his playing time remains the same with fellow wide receiver Sammie Coates slowly starting to see his playing time increase as he continues to attempt to overcome the two broken fingers that he suffered back in Week 5.