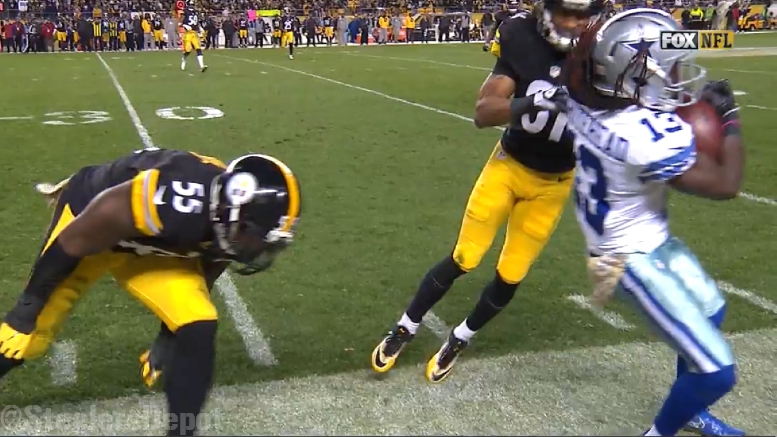 The Pittsburgh Steelers could have won this game. It’s true. You may even say that they should have won this game, in spite of the fact that they were going up against a team with a 7-1 record, the only loss coming in a close game in the season opener, starting a rookie fourth-round quarterback, a rookie running back, and without their top wide receiver.

There were two things specifically that saw them undone late in the game when they were still in position and in control of the game. The Steelers had just retaken a 24-23 lead with a little under eight minutes to play when the Cowboys looked to respond with a score of their own.

Right away, the defense shot itself in the foot on the opening play when cornerback Ross Cockrell, who is ironically regarded as a player who lacks physicality, was flagged for an unnecessary roughness penalty on a late hit on the wide receiver while he was heading on his way out of bounds.

That one poor choice immediately changed the complexion of the drive and moved the ball to the 40-yard line with a confidence booster for a Cowboys offense that had mostly relied upon unlikely explosive plays on the evening.

Dallas was able to convert a couple of third downs on the drive, including a run on third and one and a pass on third and eight, but from the 14-yard line, the run defense suddenly caved, and rookie Ezekiel Elliot ran in virtually untouched to end the six-minute drive.

The Steelers quickly responded with a touchdown drive to retake a one-point lead, but they left 42 seconds on the clock with three timeouts in hand for the Cowboys. And the defense inflicted itself with the exact same problems that enabled the previous drive.

The Cowboys were still on their side of the field when rookie safety Sean Davis was flagged for a facemask penalty that moved the ball to the Steelers’ 32-yard line after just a five-yard reception. That already put Dallas in field goal range, but, when they should have been anticipating a run, they left the flood gates open again, this for a virtually untouched 32-yarder.

As I mentioned earlier today, I do see a lot in this defense to like, and they handled themselves reasonably well against one of the best offenses in the league when they were not hurting themselves with bad penalties and unlikely explosive plays. If these issues can be rectified in the coming weeks, then they can turn the season around, because a lot of the framework that could lead to success is coming together around the areas of weakness.