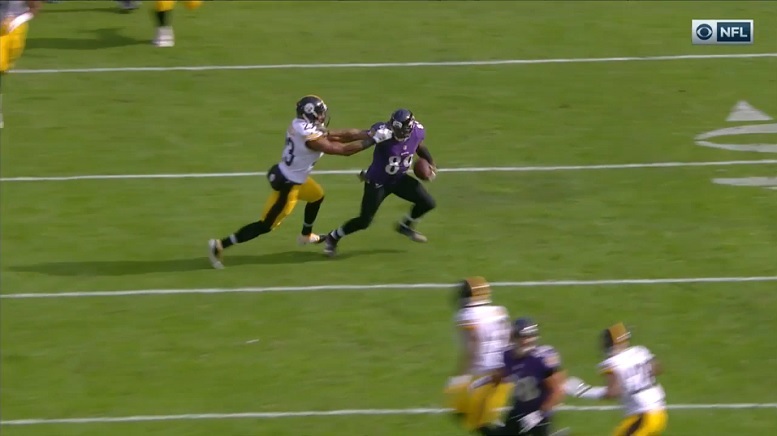 Baltimore Ravens wide receiver Steve Smith intended for the 2015 season to be his last. It proved to be an injury-plagued year, limiting him to just seven games and 46 catches. He didn’t want to end his career in that fashion, and so he elected to return for the 2016 season.

On Sunday, he picked up his 39th reception of the season—plus five more after that, a total of eight receptions—putting him over the 1000-reception mark for his career. In doing so, he became just the 14th player in NFL history to reach that plateau.

He wasn’t in the best position to celebrate his achievement, however, given that it came in a Ravens loss that dropped them to 5-5 on the season and in a tie for the division lead with the Steelers. “It’s sweet, I guess”, he said when asked about the milestone after the game.

In fitting Steve Smith fashion, his final reception of the day was punctuated by an unnecessary roughness penalty when he shoved a defender’s head down as he was going in to make the tackle with a group of other defenders.

The next-most realistic target on the list is Andre Johnson, who recently retired with 1062 receptions. Smith would obviously have to have stellar production over the last six games to reach that mark. Anquan Boldin is currently sitting at 1050 receptions, but he is an active player and still adding to his total.

Smith is actually one of four active players in the 1000-reception club, all of whom have reached that mark in the past two seasons. Larry Fitzgerald of the Cardinals is at the top of that group with 1092 receptions. Frankly, nobody is close to Jerry Rice’s 1549 receptions.

The veteran wide receiver also spent this season climbing into the top 10 of the all-time receiving yardage list. He is currently sitting in eighth place with 14,448 career receiving yards after having added 516 yards through eight games this season.