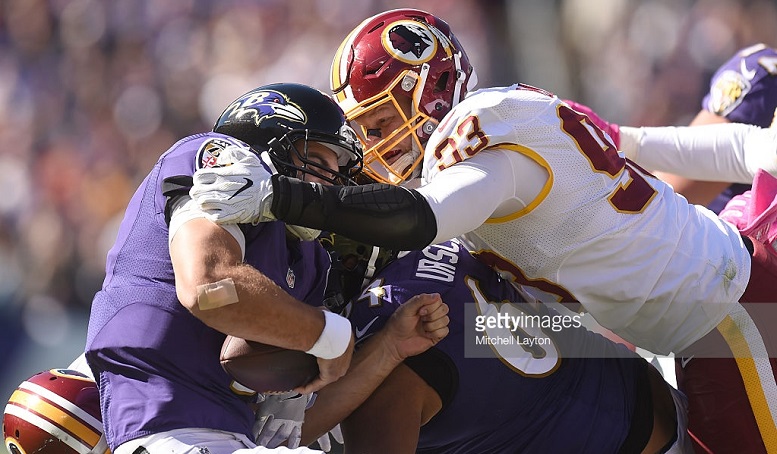 Entering Sunday’s home game against the Pittsburgh Steelers, Baltimore Ravens quarterback Joe Flacco has officially been sacked 15 times. It should be noted, however, that one of his sacks against the New York Jets was essentially a busted play as Flacco fell will attempting a handoff. With that, I decided to look at Flacco’s other 14 sacks to see when they happened and what kind of pass rush he faced.

When timing these sacks, I stopped the clock as soon as Flacco was hit initially, not when he was finally down on the ground, so that will give you a better idea as to how much time he had.
As you can see in the table below, Flacco’s average time until contact on his 14 real sacks was 3.33 seconds and that’s an extremely long time.

On only 2 of those sacks did the defense rush more than three players and they blitzed him just 3 times on these 14 sacks. Only 5 times was some sort of stunt or twist run by the defensive pass rush.

Heading into Sunday’s game against the Steelers, it appears the Ravens will have their entire starting offensive line back on the field together and that unit from left to right should be, Ronnie Stanley, Alex Lewis, Jeremy Zuttah, Marshal Yanda and Ricky Wagner.

With the above said, Flacco has already been hit a total of 45 times so far this season.

The Steelers defense has had their share of problems so far this season when comes to pressuring opposing quarterbacks so it will be interesting to see if they are ultimately able to get Flacco down on the ground at least a few times on Sunday.