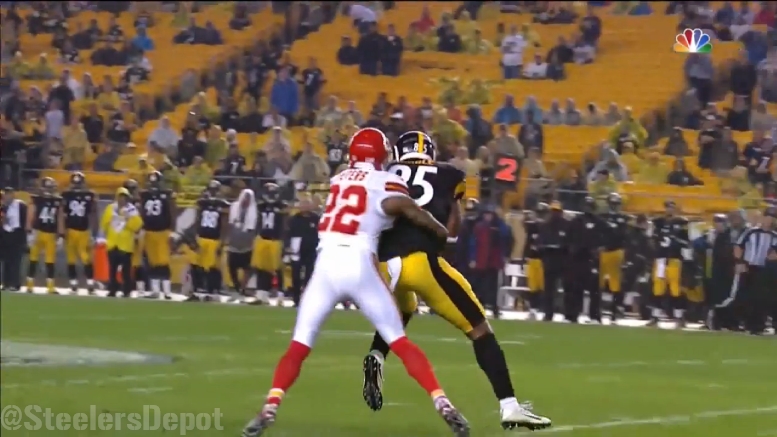 A day after the Pittsburgh Steelers’ next game following today’s, the team will have to make a decision on tight end Ladarius Green. The prized free agent signing began practicing on Monday of their bye week, which was now 13 days ago. His first day of practice opened up a 21-week window during which they have to make the decision to activate him to the 53-man roster—otherwise he has to remain on the Physically Unable to Perform List for the remainder of the year.

That means that today’s game—and potentially next week’s as well—may be a big one for first-year tight end Xavier Grimble, whom many have pegged as the most likely option to lose his roster spot if Green were activated.

Grimble is a player with a vulnerable roster spot, and when that spot is threatened, a player’s best chance of sticking around tends to be having a game that makes a team not want to let you go. He was heavily targeted last week but did not come down with contested or off-line throws. He needs to do that today.

He also needs to have the Steelers’ ground game get on track against a Ravens defense that always gives them trouble by displaying strong in-line blocking. And, perhaps most importantly, he actually has to make an impact on special teams, which he really hasn’t this year.

I should preface this by saying that, with the move yesterday to place Cody Wallace on injured reserve, thus bringing on a new 53rd player to the roster, Grimble’s chances of survival for a Green activation have increased, though he is still vulnerable both for that possibility as well as the return of Bud Dupree, which could also happen before the Cowboys game.

I wanted to lay out the case for and against Grimble, however, as it relates to the value of his roster spot. The for case includes the fact that the Steelers carried four tight ends and a fullback just last season, though that was under different circumstances including a rookie draft pick and a special-teams contributor.

Grimble is not a significant special teams contributor, however, which limits his hold on his roster spot. But it should be noted that while the Steelers started the season trying to use Jesse James as an every-down tight end, they have more and more given Grimble some of James’ snaps in single-tight end packages. He has logged over 30 such snaps, with about half of them coming in the most recent game. That is notable for a player on the fringes of the roster. it says that they like him.

But you have to consider the fact that when Green returns, he is essentially going to be replacing, perhaps, what they like in Grimble that they don’t see as much in James. Despite what his reputation might be coming in as a blocker, he is going to be used as an in-line tight end. And, of course, his size, speed, and athleticism—and especially his hands—outclass Grimble by far as a receiving threat.

That means his skill set will become redundant, with James sliding into the number two tight end role. But if Grimble has a good game today, and perhaps next week as well if the opportunity still persists, he can open the team’s eyes in foregoing a fixed number two tight end, with all three behind Green splitting time where they are most effective.

Of course—assuming Green is ever even activated—he will also require an adjustment period in which he gets himself into playing shape and up to full capacity, so he is not going to be immediately logging every snap.