A glimpse of the James Harrison of old was on display during the Pittsburgh Steelers Sunday loss to the Baltimore Ravens. Harrison tallied 6 tackles, 2 sacks and a forced fumble, wreaking havoc once again on quarterback Joe Flacco and the Ravens. Unfortunately for the Steelers, Harrison has been the only outside linebacker who has shown any signs of consistent pass rush since his return in 2014. 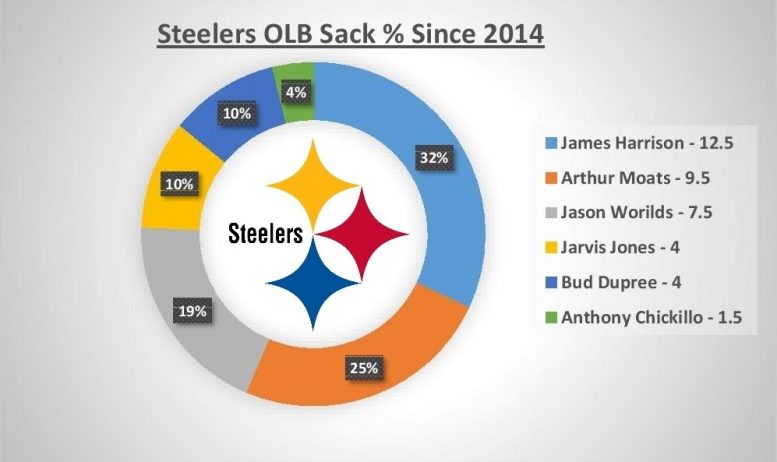 In the two and a half seasons since being lured out of retirement, the 38-year old Harrison has accounted for nearly one-third of all sacks by Steelers outside linebackers. Out of 39 total outside linebacker sacks, Harrison has 12.5 while former first round selections Jarvis Jones and Bud Dupree have 8 combined. While Dupree will have his chance soon to increase his tally, Jones has already defined who he, which is a run stopper with minimal pass rush success. Arthur Moats has tallied 9.5 sacks since coming to Pittsburgh in 2014 and has had success as a rotation piece but that remains his ceiling.

It is obviously never a good sign when a 38-year old is the face of your outside linebacking group but the Steelers will take what they can get for the rest of the season. With Dupree’s return the only short term solution available, general manager Kevin Colbert should take notice that he needs to add multiple edge rushers to the roster in 2017.