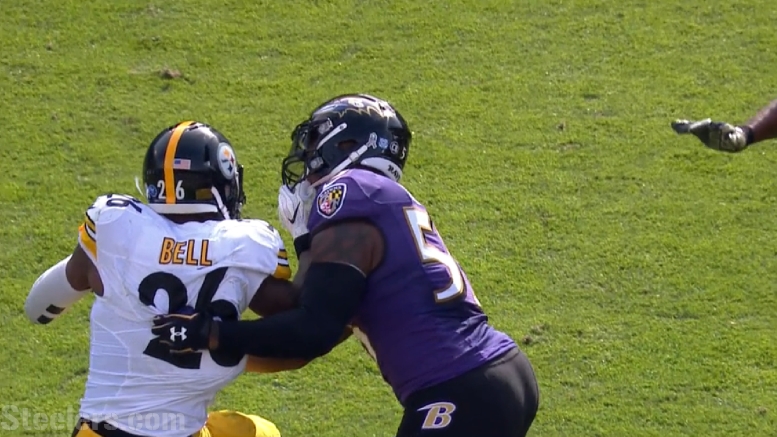 While there was no shortage of issues with the Pittsburgh Steelers’ offense yesterday, one of the biggest problems was their complete and utter inability to establish anything resembling a running game, recalling some of the worst moments of the late 2000s after the team’s offensive line that won a Super Bowl with the ground game was torn apart.

Against an admittedly stout Ravens run defense, the Steelers managed just 33 rushing yards on 18 rushing attempts, working out to an average per attempt south of two yards per carry. And it can’t really be blamed on some sort of unwillingness to commit to the running game. In fact, many people were calling for them to give up on it.

The frequent run fails often set the offense up in bad circumstances in terms of down and distance, and that includes a play that should have been a three-yard loss when Le’Veon Bell was stuffed in the backfield, but instead drew a 15-yard face mask penalty instead.

For his part, Bell picked up 32 total rushing yards on 14 rushing attempts, and to illustrate how poor that actually is, 13 of those yards came on a draw run on third and three with less than two minutes to play and Pittsburgh trailing by 14 points, with no timeouts. He had just 19 yards on 13 rushing attempts prior to that late play, which is pretty amazing.

After all, they did it last year. In the first Ravens game in 2015, Bell rushed for 129 yards and a touchdown on just 22 carries, and that was a game in which Ben Roethlisberger did not play, with the Ravens anticipating a heavy workload for Bell.

In the second Ravens game of the 2015 season, Bell was already out for the season, but the running game was still effective, with DeAngelo Williams picking up a 100-yard game on 17 carries and two touchdowns on the ground. Granted, they lost both games as much as they lost this one, but this should show that there is no excuse for simply having no ground game against the Ravens.

Bell had just 59 yards rushing in the first Ravens game in 2014, but he had just 11 rushing attempts. They did struggle in the second game, but then again, Roethlisberger threw six touchdown passes. During his rookie season, he had 93 yards on 19 carries and 73 yards with a touchdown on 16 carries.

It’s early yet in the analysis of this game, and it’s not immediately clear to me just yet why the running game was so terrible against the Ravens, no matter how well Baltimore may have played the run. But I do know that they have done much better, should have done better yesterday, and must do better next time around.