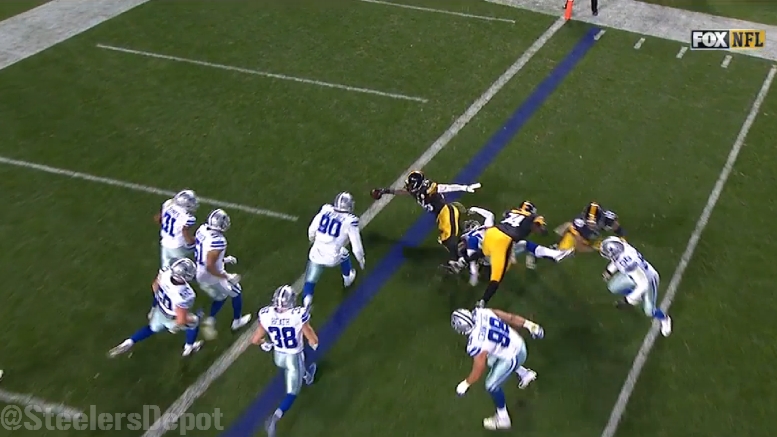 The Pittsburgh Steelers offense commanded a unit that scored four touchdowns. Frankly, it has been a while since that happened. The last time that they put that many balls into the end zone was on October 9, when they hosted and routed the Jets. It is probably not a coincidence that it is also the last time that they won a game.

But while they may have lost the game yesterday, with the defense giving up 35 points to the offense’s 30, I can’t help but feel that the Steelers’ ability to finally get Le’Veon Bell involved in the scoring process this season was meaningful.

This was Bell’s sixth game of the season, and while he has played well up to this point, to be sure, it was only the first game in which he has actually gotten into the end zone. And he managed to get into the end zone not one, but twice, doing so both with a reception as well as a carry. It was the second game in his career in which he had both a rushing touchdown and a receiving touchdown.

Bell’s rushing numbers are not exactly where they were a season ago, although he has run a touch less. But we are at a logic point of comparison, considering that he was limited to only six games during the 2015 season due to the suspension that cost him the first two games and the knee injury that cost him the final eight games.

In 2015, Bell had 113 carries through six games. He picked up 556 yards on the ground, averaging 49 yards per carry. Three of those carries got into the end zone, including a walk-off touchdown run against the Chargers, which was the last time that he had scored until yesterday.

He also had 24 receptions in six games, but for just 136 yards, averaging 5.7 yards per reception, though it is worth keeping in mind that Ben Roethlisberger missed the vast majority of the games that Bell was active and healthy for, so there is a strong correlation there.

Through six games this season, Bell has an even 100 carries, and he does have 433 rushing yards. His yards per carry figure is down to 4.3, which is respectable, but not the sort of production that is typical of his abilities, though it does match his career average.

Where the difference has come has been in the receiving game, as he also had 45 receptions on the season, nearly half the amount of carries that he has, which is kind of crazy to think about. And on those 45 receptions, he has picked up 360 yards, and that is with just two catches of 20 yards or more on the season.

In six games, Bell has gained 993 yards from scrimmage, so it’s possible that on his next carry he will reach the 1000-yard mark on the season. But for all the yardage he has mustered, the lack of scoring had been curious. He had a scoring drought in 2014 before they came in bunches at the end of the season. Here is to hoping for more of the same.