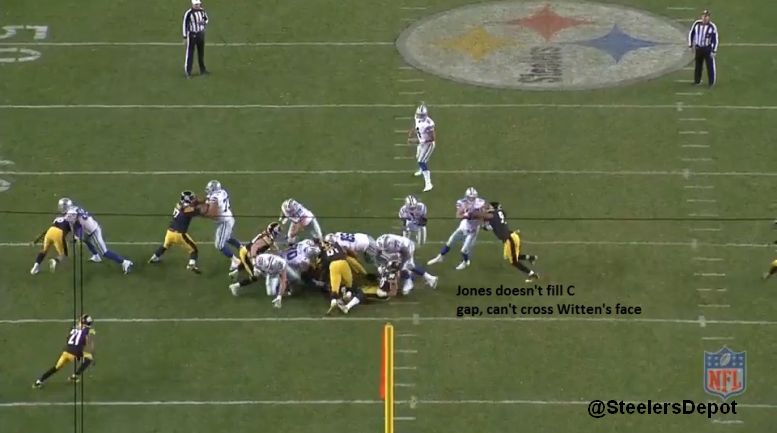 Quick update and confirmation over what happened on the Dallas Cowboys’ final play, a 32 yard dash by Ezekiel Elliott into the end zone to give them a 35-30 win over the Pittsburgh Steelers.

Mike Prisuta over at DVE has the goods for us. It appears he was one of the reporters speaking to Jarvis Jones today and Jones admitted he screwed up on Zeke’s score. The trio of pertinent tweets.

Third-and-1 run stuffed in 4th how it's supposed to work. Harrison crashed down, forced Elliott to bounce out to Davis, Timmons cleaned up.

Timmons also wasn't in help position on Elliott GW TD (blitzed into traffic) and Shazier was on the ground. But Jones was in the wrong gap.

Of course, if you’re a follower of the site, you already know all of this. Here’s what we said on Tuesday morning.

2. Jarvis Jones doesn’t win his gap. As we showed in the first example, the linebacker has to maintain the C gap. He can’t get reached and give up the inside. Jason Witten does a great job of keeping him at bay, maintaining inside leverage just enough. So when Elliott does cut back, there is no one there.

Remember, Jarvis isn’t the force player. The CB, again Sean Davis, is. Jarvis isn’t force. He isn’t two-gapping. He is responsible for one gap. And he failed.

That breakdown at the game’s biggest moment may have played a role in Jones’ demotion. James Harrison will start ahead of him Sunday, and presumably for the rest of the season.

Jones is known as a solid run defender, and generally is, but this mental lapse will loom over him for the rest of the season in what will likely be his last year with Pittsburgh.