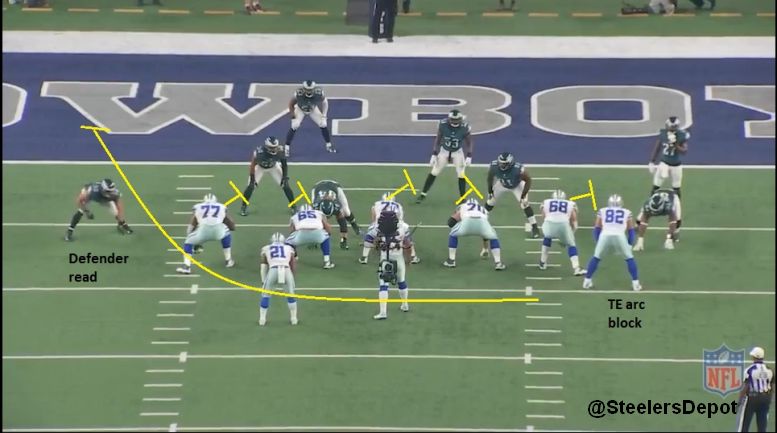 The Cowboys of yesteryear are back. And this run game is firing on all cylinders. For my money, it’s the best in the league. Best offensive line and a top five running back. Buckle up, Steelers’ Nation.

Ezekiel Elliott is averaging 5.0 yards per carry this year, including an absurd 5.8 over his last five games. Their 39 runs of 10+ yards rank second in the league while their nine of 20+ is good enough for third. As a team, the Cowboys have 14 rushing touchdowns, also ranked second in the NFL.

A large thanks to their stellar offensive line. Your starting five:

Smith, Frederick, and Martin are all top five at their position, Free is a top ten right tackle, and Leary is a backup who would start on most teams.

What make them even more dangerous beyond just personnel is scheme. It’s a varied attack with almost every concept. Inside zone, gap runs, base/combo blocks, split zones, jet sweeps, and some read option. 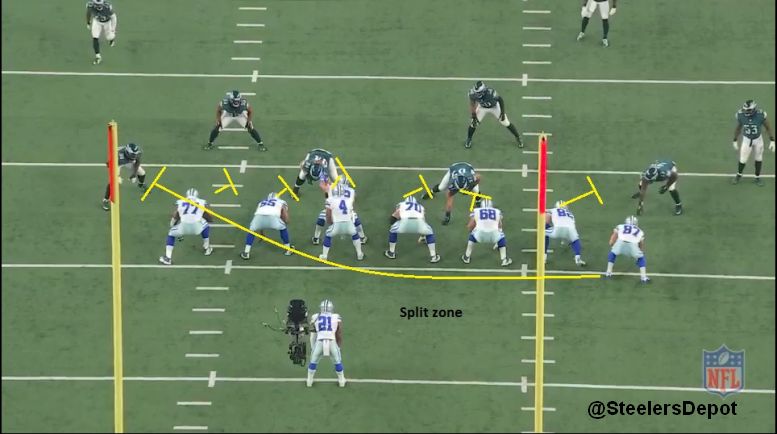 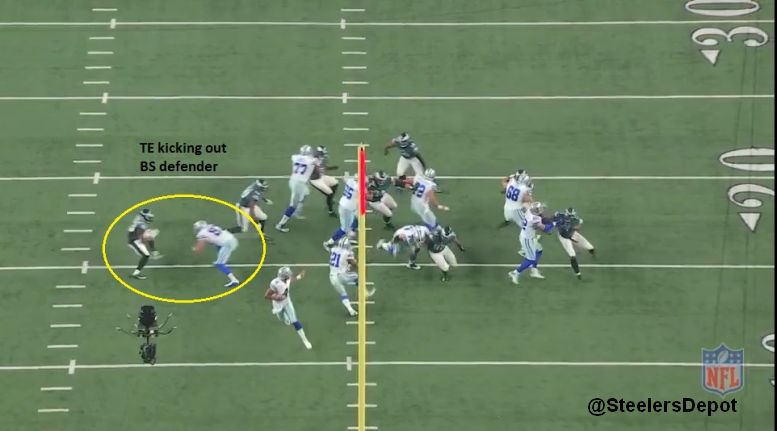 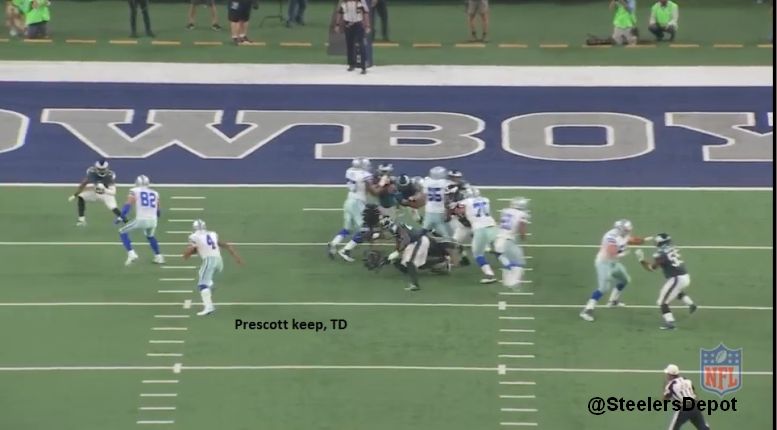 Dallas uses a lot of two tight end sets, getting Geoff Swaim (#87) a lot of playing time. And it’s not like Jason Witten ever comes off the field so they’re almost all 12 or 13 personnel looks. Also do have a fullback, #41 Keith Smith, who is listed at 6’0 232.

No one wants to establish a ground game better than Dallas. On 1st down in the first half (to eliminate game circumstances where you can’t control run/pass), the Cowboys have run the ball 60% of the time. That’s the highest mark in the league, based on my research via Pro Football Reference.

In a way, that does play into the Steelers’ hands. If they can get stops. If.

It’s the rookie sensation, Dak Prescott. If the Steelers lose to him, it’ll be the first time since 1998 that they lost to two rookie quarterbacks. But he’ll be tough to beat.

He’s completing 66.5% of his throws, thrown 12 touchdowns to only two picks. And it hasn’t been just home cooking either. He’s actually been better on the road, completing 72% of his passes and throwing eight touchdowns to one pick. Prescott has yet to lose on the road and went up to Green Bay to toss three touchdowns in a 30-16 victory in Lambeau. Whew.

A rookie’s best friend is a strong supporting cast and his is pretty good. Dez Bryant is finally back as their #1 legitimate threat but Cole Beasley is as reliable a weapon as anyone in the league. He’s caught 82.7% of his targets, the second-highest mark in the league of any player with 30+ targets. Only Cordarrelle Patterson has a better mark and he’s a gadget, line of scrimmage player.

Beasley also has 17 receptions on third down, the second most of any player. The go-to threat.

But Jason Witten is their ‘ol reliable and never leaves the field. Terrance Williams can be a YAC guy while Lucky Whitehead is their gadget type, who has been involved in some end arounds/jet sweeps.

The Cowboys’ offense has been strong on third down, 5th best in the league, with the 11th best red zone offense.

Their ground game helps establish their playaction game. They use it early, often, and effectively. Some sail and Y Banana concepts with the first read in the flat but the ability to progress downfield. Often going to get the bootside tight end faking a down block before peeling off into the flats.

Front seven is going to have to be very good at reading their keys. Have to be assignment and gap sound.

Have some divide routes in their vertical concepts too but nothing I could really pin down from a down/distance situation.

Dan Bailey is having a fine season and continues to be one of the most accurate kickers ever. Lucky Whitehead is their return man in both phases but posting generally pedestrian numbers. Pretty aggressive on punts with just three fair catches on 16 attempts.

Cornerbacks Anthony Brown and Brandon Carr were the jammers on the punt team last week. With Carr starting though, that may not continue this week.

Things won’t get any easier this week for the Pittsburgh Steelers as they look to bounce back from Week 9’s loss to the Baltimore Ravens on the road by welcoming the red-hot Dallas Cowboys into Heinz Field for the national game of the day at 4:25 p.m.

It’s quite remarkable what the Cowboys are doing this season without star quarterback Tony Romo and a banged up Dez Bryant for much of the season. Despite the rash of injuries on offense, the Cowboys have relied heavily on two super rookies in quarterback Dak Prescott and running back Ezekiel Elliott.

The duo has combined to lead Dallas to the third-best offensive output in the league through 10 weeks, racking up 411.5 yards per game, with 246.2 of those yards coming through the air (18th best in the league) and another 165.2 yards coming on the ground (tops in the NFL).

It’s no secret just what the Cowboys want to do on offense this season, thanks to the best offensive line in football, which allows Dallas to play smart, ball-control football, pounding opposing defenses into submission.

So far through nine weeks of the season, Dallas has turned the ball over just six times on the season (four fumbles lost, two interceptions). That’s remarkable, considering that they have a rookie quarterback running the offense who wasn’t supposed to see the field this season behind Romo, as well as a rookie running back that struggled early in the season with fumbling issues before tightening it up in the last few weeks, leading to some dominant football.

Up front, it’s quite clear that Dallas has an embarrassment of riches along the offensive with All-Pro left tackle Tyron Smith, Pro Bowl center Travis Frederick and Pro Bowl right guard Zach Martin.

Not included in that list above is standout second-year left guard La’el Collins, who is arguably the best run blocker Dallas has on the roster.

From left to right, Dallas should look like this on Sunday:

With Collins and Ronald Leary (concussion) likely unavailable for Sunday’s game, veteran center Joe Looney could start at left guard, which would be a welcome sight for the Steelers’ defensive line.

Due to the dominant offensive line, Dallas can run on anyone any way that they want, whether it be with the read-option, counters, powers or tosses. They simply manhandle you up front and grind out wins with a consistent, mistake-free offense.

As of late in this league, that’s a tremendous winning formula.

Elliott currently leads the league in rushing with 891 yards and seven touchdowns on five yards per carry, including 416 yards after first contact, which is good for second in the league behind Tennessee’s Demarco Murray.

Having a guy like Elliott to lean on has made things relatively easy for Prescott, who is matching Elliott play-for-play in Dallas’ remarkable start.

Currently, Prescott has a 6:1 TD/INT ratio on the season (12 touchdowns, 2 interceptions), while throwing for 2,020 yards on just 248 attempts. He’s got the big arm and is really smart with the football, but what has really stood out to me with Prescott is his accuracy, which has improved significantly since his time at Mississippi State.

That’s been the biggest step forward in his game has been his development as a passer. Although Dallas doesn’t ask him to do too much through the air, he’s shown the ability to be able to direct the offense down the field via the pass, which has provided the Cowboys with serious balance offensively without Romo.

Which leads us to Prescott’s pass-catching weapons.

Surprisingly, Dez and veteran stalwart Jason Witten do not lead Dallas in receptions. In fact, it’s the spark plug slot receiver Cole Beasley that has been the most consistent pass catcher throughout the season.

Beasley has already hauled in 43 receptions for 499 yards and four touchdowns, leading Dallas in all three categories while establishing himself as Prescott’s security blanket across the middle.

Outside of Beasley, the usual suspects of Witten and Bryant are options two and three in this offense, with Witten coming on strong as of late, including a massive game against Cleveland on the road in Week 9 (8/134/1).

Bryant is still trying to battle back from a knee injury and doesn’t look completely comfortable with Prescott under center just yet, so he’s nowhere near the threat he once was with Romo.

Terrance Williams is the final piece of this offense, but he’s so incredibly inconsistent that you just don’t know which player will show up on game day. With Bryant back in the fold, Williams’ targets have decreased, and rightfully so as he’s so maddeningly inconsistent when it comes to running the right routes and catching passes.

That’s about in on the offensive side of the ball. Dallas is a physical football team that looks to hurt you on the ground instead of taking to the air like they once did with Romo.

On special teams, Dallas is blessed in much the same way that Baltimore is:  they have arguably the best kicker in the NFL and one of the most consistent across the board in Dan Bailey.

With a booming leg and the ability to hit from pretty much anywhere on the field, Dallas can rest easy knowing that once they cross midfield they’re pretty much guaranteed to get three points.

On the year, Bailey has missed just two field goals, both of which came in the 40-49 yard range.

On kickoff returns, second-year receiver Lucky Whitehead is a real threat to hit the home run any time he gets the ball in his heads. You might remember him from his kick return for a score in Los Angeles’ first game back in LA during the preseason, but he’s quietly put up a great year returning kicks for Dallas.

Whitehead currently averages 24 yards per return with a long of 33 yards, but where he’s really leaving his mark is as a punt returner, where he’s able to use his elusiveness and impressive speed in traffic to really hurt teams.

He’s currently averaging 8 yards per punt return and has come close to busting a few wide open before getting hauled down at the last second.

Overall, Dallas won’t look to do anything special on offense other than line up right across from you and look to hit you in the mouth play after play until you’ve had enough.

That seems to be their MO this season, and it’s working quite well.