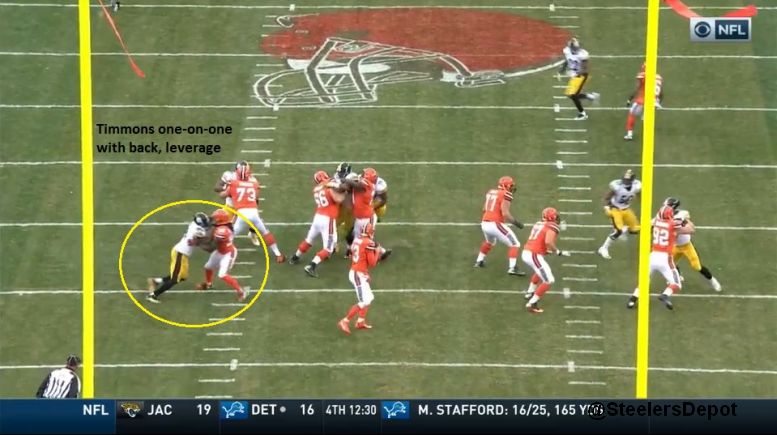 There are basically three reasons how a defense registers a sack.

Sunday against the Cleveland Browns, the Pittsburgh Steelers had all three in their eight sack barrage. But we are most interested in that third one, the blitz scheme, of how Keith Butler’s looks created sacks.

And there was one look that created a lot of pressure Sunday.

Butler did a great job of creating pressure heavy looks with players lined up in almost every gap. It created chaos and confusion along a struggling Browns’ line and some big plays for the Steelers.

They used one look several times. On 3rd and long, they’d cover up every player but the center. It forced the Browns to assume everyone was rushing and pinch their protection, creating favorable matchups for those on the edge.

Here’s the look. Both defensive linemen essentially two techs, one inside shade, one outside, with the linebackers in aggressive, blitz-like stances. If you’re Cleveland, you have no idea who is coming or dropping. 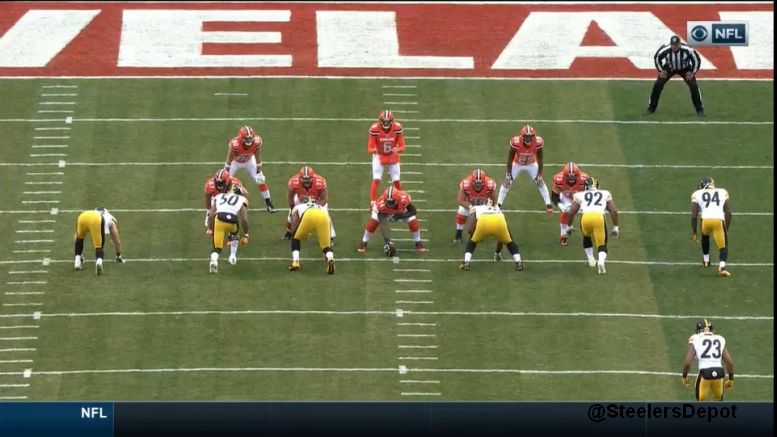 It’s Lawrence Timmons lined up as the ROLB. With James Harrison overtop of left tackle Joe Thomas, Thomas isn’t going to be responsible for Timmons. His immediate threat is Harrison so Thomas doesn’t kickslide.

On 3rd and 12, the Browns are trying to run a screen to the right to Duke Johnson. But because Thomas is pinching on Harrison, Timmons is free off the edge to chase Cody Kessler. With Ryan Shazier is dropping, and good recognition from Javon Hargrave, the screen is unavailable. 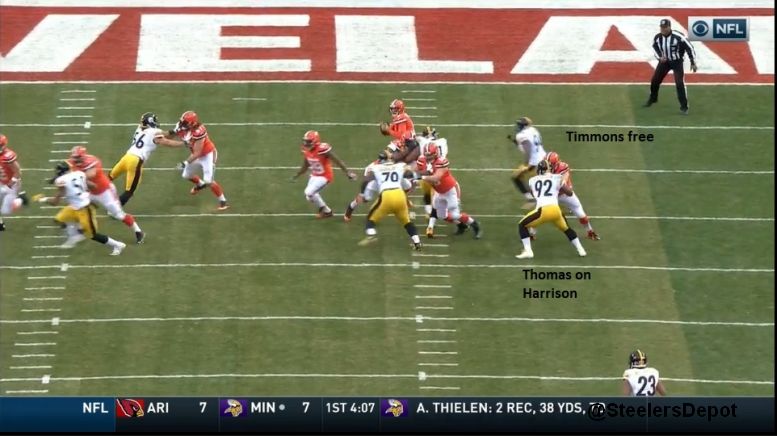 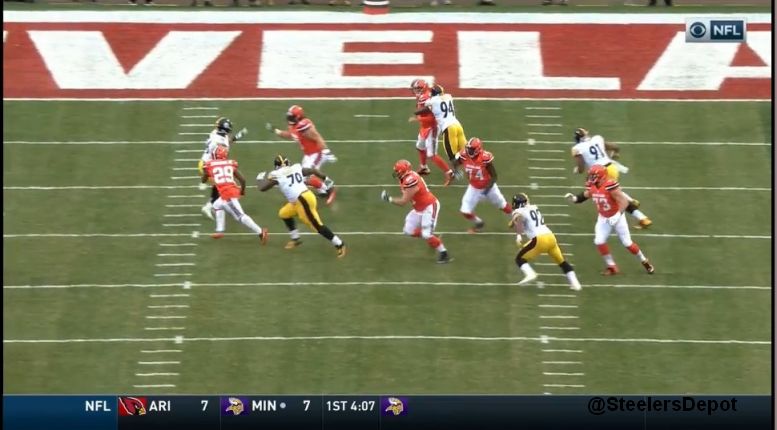 Timmons blasts Cody Kessler from his blindside and the pass is incomplete.

Later in the game. Same look, a two back set with the TE and RB against the same defensive look. There’s no screen here but it’s similar protection. Thomas is responsible for Harrison, leaving Timmons free. 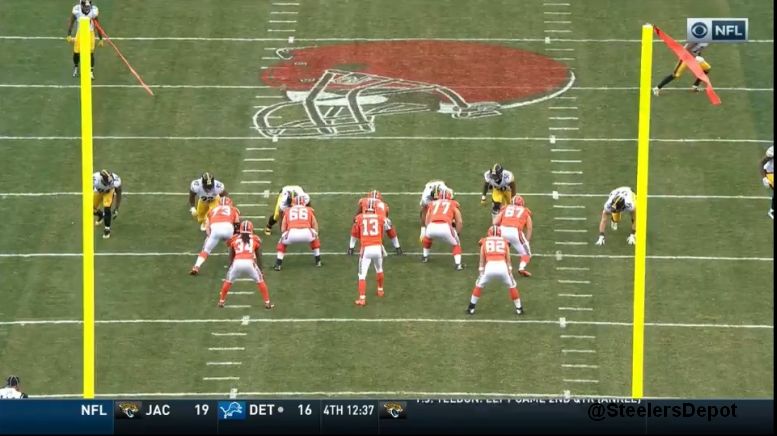 It creates a one-on-one matchup with the back, Isaiah Crowell, for Timmons. It’s backs on backers, and that’s a place you want to be as a defense. Timmons does a great job to get low and out-leverage Crowell, shedding him and wrapping Josh McCown up for the sack.

Last, the Steelers do the exact same thing. Same two back set, same front from Pittsburgh.

Timmons again gets pressure, working on Duke Johnson, but it’s the twist from the linemen, Hargave and Stephon Tuitt, that works out here. Center Cameron Erving never sees and passes off the stunt until it’s too late, leaving Hargrave free. 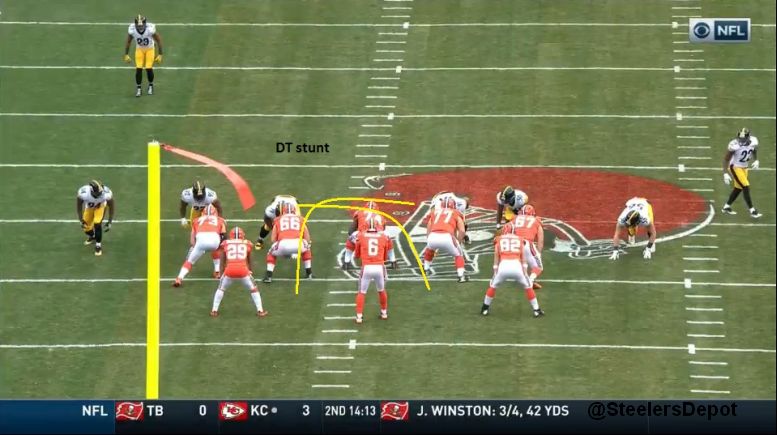 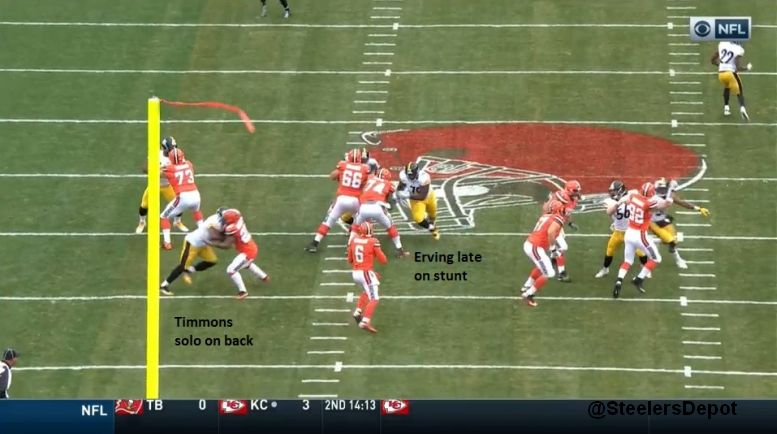 He cleans up the pressure created by Timmons and gets a sack. 4th down, Browns punt.

Two sacks and nearly a third all from the same concept with no adjustments from Cleveland.

I know it isn’t much to say you outcoached a winless team but Hue Jackson is a really smart offensive guy. And to get outplayed like this is surprising but a tip of the cap to Butler for finding ways to manufacture player. And for the players for finishing them.