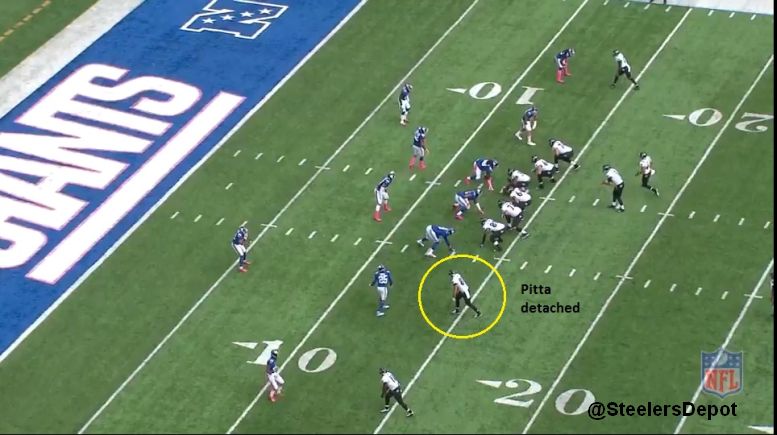 This year, Josh Carney and I will break down the opposing team’s defense in our weekly scouting report. Like last year, I will be looking at the opposing team in a more broad, scheme-approach. Matthew will have a closer eye on the individual players.

There might be a couple more power/gap runs than in the past but their bread and butter is still inside/outside zone.

Terrance West has given them a shot in the arm as a rushing attack, averaging 4.4 YPC, much higher than the team average of 3.8. There’s been a lot of faces this year, Justin Forsett, Buck Allen, Lorenzo Taliferro, but West and rookie Kenneth Dixon are now their top two.

I’d consider the Ravens to be more traditional and conservative in their personnel looks. Lot of two tight end sets and heavy dose of fullback Kyle Juszczyk, arguably the most-used and best fullback in the league. He’s evolved into an H-Back role and sees a lot of snaps on third down. Second on the team with nine receptions on get-off downs. Played 40% of the snaps this year. That’s no joke.

As a rushing offense, they have only 13 runs of 10+ yards, tied for 27th worst. But they have four of those runs go for 20+ which is about middle of the pack. It’s an ok rushing offense but one that is getting better.

And like the Miami Dolphins’ contest, they’re getting healthier too. Ronnie Stanley at left tackle and Marshal Yanda at right guard should be back in action. That’s huge for them. My projected front five.

Having a fullback gives them an element the Steelers haven’t seen a lot (though they did get a taste before the bye with the Patriots’ James Develin). One back zone, two back zone, one back power, two back power. Alex Gibbs would be proud.

On 4th and goal from the one against the New York Giants, they broke out a toss sweep to the left. Something to keep in mind.

Again, similar to what they’ve done in the past. Lot of vertical shots, pass interference offense. And they have speed to burn with Mike Wallace, Breshard Perriman, and Chris Moore.

But their passing attack overall has been really poor statistically. Their YPA is 5.9, only ahead of Houston and San Francisco, their 61.2% completion rate is 23rd, and they’ve thrown only five touchdown passes, the fewest in the NFL. Their red zone offense as a whole is tied for 19th.

Wallace and Dennis Pitta are their two most oft-targeted players. Pitta leads them with 38 receptions, Wallace with 35. The ex-Steeler is averaging a healthy 14 yards per catch.

Like I said earlier, their fullback Juszczyk is a big part of their passing game with 18 receptions. He has nine on third down, second on the team behind Pitta’s whopping 13.

When Mike Tomlin talked about the Ravens doing different things with a guy like him, it’s stuff like this. Being lined up as the fullback on the goal line and releasing into the flats, for example. 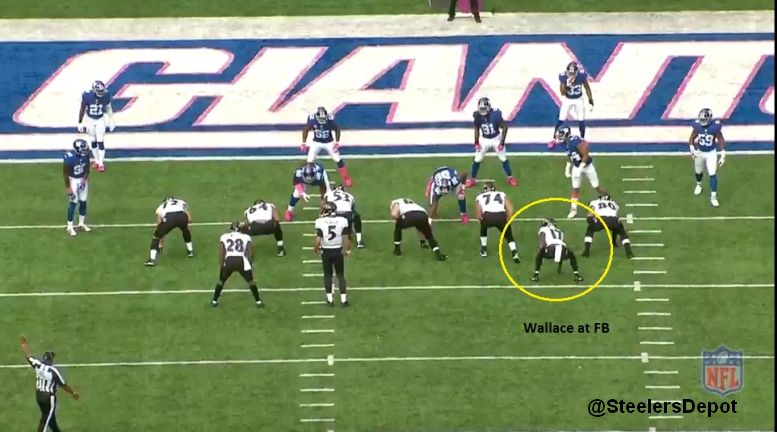 Ravens love to use playaction. One alert is in their 2×2 looks. Twice, they faked the run and looked to hit the TE on a crosser.

And they live the cliche of taking vertical shots in sudden change opportunities. Charted each play after a turnover this season in applicable situations (i.e. not end of game moments). On five of their seven chances, they looked vertically and ran playaction on four of them.

Josh has covered the Ravens’ special teams pretty thoroughly. Baltimore has a couple of the best with Justin Tucker and Sam Koch.

Koch has run a lot of fakes, including once last year vs Pittsburgh, and also ran for a punt – he failed – in the first quarter down 10-3 on their own 17.

After a timely bye week for the Pittsburgh Steelers, it’s time for Ravens Week.

While Alex so elegantly broke down the same old Baltimore Ravens offense in terms of schematics above, I’ll take a deeper look at the individual performers on the stagnant Raven offense below.

Let’s start with the tip of the sphere; the $25 million dollar man … Joe “Is He Elite?” Flacco.

So far in 2016 Flacco leads the NFL in attempts and comes into the Week 9 matchup against Pittsburgh with six straight games with 40+ attempts. That’s not a winning formula for the Ravens, but it’s interesting that the high volume of attempts for Flacco has continued even after the offensive coordinator change from Cam Cameron to Marty Mornhinweg.

The Ravens are not a high-flying passing attack by any means despite having a solid group of receivers, highlighted by former Steeler Mike Wallace, second-year wide receiver Breshaud Perriman, veteran stalwart Steve Smith and emerging possession receiver Kamar Aiken.

But despite not being a high-flying attack that will drop 30 points on defenses through the air, Flacco and the Ravens continue to bash their heads against the wall hoping for a breakthrough in the passing game.

All of that has led to the Ravens having the seventh worst offensive attack in football, averaging just over 332 yards per game and 19 points per game while sitting 29th in the league with 4.8 yards per play, which just so happens to barely be ahead of the San Francisco 49ers, Minnesota Vikings and Houston Texans.

With Flacco, he is what he’s always been; a conservative quarterback that checks down roughly 65 percent of the time and occasionally looks to take the big shot down the field off of play action.

While that can be a successful formula at times for the Ravens, they need to do a better job of establishing the run and sticking to it. Honestly, Baltimore has had a ton of success on the ground this season as Terrance West has emerged as a future star behind a banged up offensive line that has at times dominated.

The issue there though is the fact that the play calling goes away from what’s been working far too often, leading to the Ravens’ offense stalling early and often.

When the Ravens turn to West it usually goes very well for Baltimore, as the third-year running back is averaging 4.4 yards per carry (424 yards) on 96 carries to go along with three touchdowns.

After stints in Cleveland and Tennessee, West seems to have figured out how to be a pro in Baltimore, where he’s really thriving in 2016.

He’s arguably the best skill offensive player for Baltimore, yet they look to throw the ball at a nearly 70 percent clip on the season.  That’s absurd considering the success the Ravens have on the ground with West being a workhorse.

And he’s done all of that without All-Pro guard Marshal Yanda and promising rookie tackle Ronnie Stanley missing much of the last few weeks this season.

With both appearing to be back this week against Pittsburgh, West should see a major boost on the ground.

Not like he’d need it though based off of what he’s done over the last month or so.

I love the burst through the hole on the two GIFs above by the powerful West. That’s a heavy load moving downhill fast into the secondary, making for a tough stop for defensive backs.

Before this season, West danced a lot and didn’t appear to be very decisive when reaching the hole. This season has been a major transformation for the Towson product though, and it’s showing week after week when the Ravens feed him the rock consistently.

Along with his burst and decisiveness, West has really improved his vision and added a little bit of a wiggle in the open field to his game.

Based on the Steelers’ run defense the last few weeks, West could be in for a big day — should the Ravens realize what their strength is offensively and utilize it.

There’s plenty of reason to as well, with an offensive line set to look like this left to right:

On paper, that unit looks like a mauling group in the run game.

But where they struggle is in pass protection, which has resulted in a subdued passing attack that relies on crossing patterns, quick slants, screens and checkdowns to running backs out of the backfield.

When Flacco checks down, he seems to have the most success with fullback Kyle Juszczyk, who is arguably the best dual-threat fullback in football.

Juszczyk is a consistent pass catcher that can really make plays with his legs after the catch, providing the Ravens with a home run threat on check downs … whatever that’s worth.

Look for a lot of flares out of the backfield and Texas routes against Pittsburgh’s linebackers this week for Raven running backs.

Out wide, the Ravens appear to have speed for days with Wallace and Perriman on the boundary, but Baltimore has just 18 passing plays of 20+ yards, and just three of 40+ yards. That’s pretty pitiful with the speedsters the Ravens have at receiver.

But credit to Wallace, who has really emerged as a possession receiver for the the Ravens, quickly becoming Flacco’s most trusted target outside of veteran tight end Dennis Pitta, who has bounced back from a few injury riddled years to become a consistent threat in the middle of the field once again.

Smith should be back for this game, so we’ll need to keep an eye on him and Mike Mitchell, but the Ravens’ passing attack is so bland that there’s nothing really to worry about here besides the occasional deep ball.

On special teams, Baltimore has arguably the best kicker in all of football in Justin Tucker, who hasn’t missed a field goal in 24 tries. Impressive.

He’s got the strongest leg in the league — and likely the biggest personality of any kicker, like ever — so the Ravens are set knowing that anywhere roughly 52 yards and in that they’re going to get three from Tucker.

Punting is another strong area on special teams as Sam Koch averages just of 48 yards per punt, downing 12 of his 37 punts through eight weeks inside the 20-yard line, putting the Baltimore defense in favorable field position game after game.

With the kicking game solid all around for the Ravens, the only major hole on special teams appears to be the return game despite having the greatest kick returner and punt returner in the history of the league in Devin Hester.

Hester’s clearly lost a step or two (maybe five) and isn’t the home run threat anymore, but I didn’t expect his play to be as bad as it has been.

On 12 punt returns, Hester has called fair catch on eight of them and averaged just over six yards per return on the others while also allowing an inordinate number of other punts to hit the turf and roll inside the 20, putting his offense at a major disadvantage with a long field.

While Hester does have a 60-yard kick return to his credit this season, he just doesn’t have the same burst or vision that fans have grown accustom to.