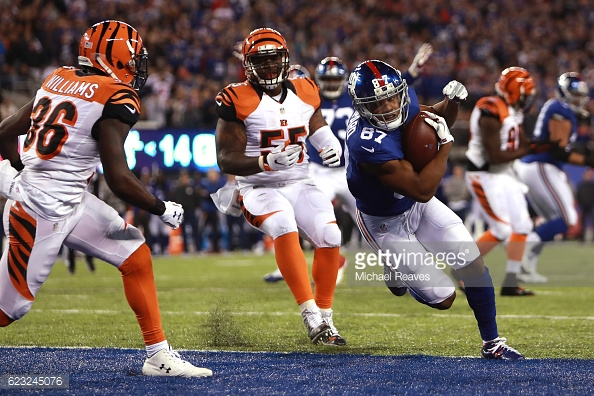 Little heads up for Pittsburgh Steelers’ fans and yeah, probably fantasy football players too. Sterling Shepard could be in for a big week.

Two days after being snubbed by Eli Manning, failing to receive a single target in the New York Giants’ 27-13 win over the Cleveland Browns, Manning apologized to Shepard for not looking his way.

Eli Manning said he apologized to Sterling Shepard for not getting the ball to him on Sunday.

It sure sounds like that outcome will change against the Steelers, meaning a heavy dose of Shepard.

Shepard is having a nice rookie season, so far catching 44 passes for 476 yards and five touchdowns. He had found the end zone in three straight games before this past Sunday.

Besdies the Browns’ game, only once all season did Shepard have under six targets so expect him to be back involved with things against the Steelers. He’ll see a lot of William Gay, a sorta battle of old money versus new money.

Shepard is one of several weapons in that passing game, led by Odell Beckham Jr. and Victor Cruz, who has been impressive after a long journey back from a torn patellar tendon.

But Gay vs Shepard could turn out to be one of the game’s key matchups in what will be another critical game for the Steelers.