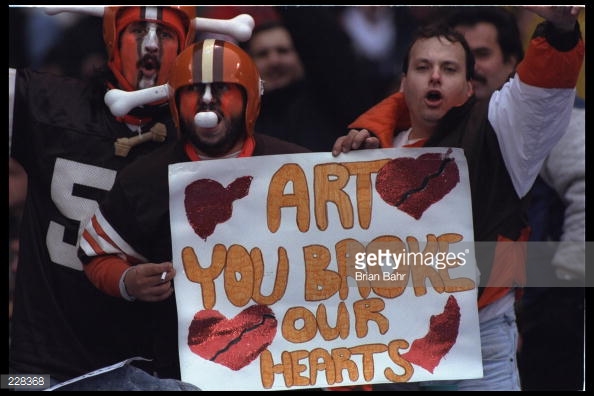 In Cleveland, that is the goal. Or really, the hope. Not win the North. Not make the playoffs. Not hoist a Lombardi. Just win one game.

There ya have it. The 2016 edition of the Cleveland Browns will go at least 1-15. Bust out the confetti.

Kirksey also said that linebacker Jamie Collins, traded for last week, has already become “one of our leaders.” That might be a new record.

To be fair, the Browns have had some awful luck. They’ve played four one-possession games, obviously losing them all, and have gone through more quarterbacks than some teams will in five years. They may have found a quarterback of the future, or at least some sense of stability, in Cody Kessler while Terrelle Pryor is having one of the best feel-good stories in the NFL.

But the offense is too inconsistent, injuries too common, and a defense so bad most fans would probably be unable to rattle off anyone’s name sans Joe Haden.

Cleveland will be in the primetime spotlight this Thursday against the Baltimore Ravens. Given the fact Baltimore is your technical AFC North leaders, you might want to quietly root for the Browns to get the monkey off their back.

The rest of the schedule looks difficult to find a win: Steelers, Giants, Bengals, Bills, Chargers, Steelers. I’m sure there’s a joke to be made about the Pittsburgh in there somewhere.

The Browns are coming off a 3-13 season which, if you can believe it, is the fewest wins they’ve had since 2000. Only once have they finished a year with under three wins, going 2-14 back in 1999, the first year they came back into the league.