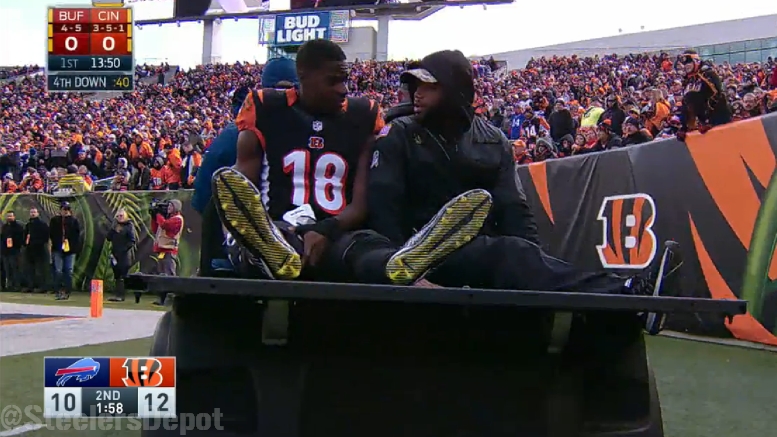 The Cincinnati Bengals didn’t just lose their game yesterday to the Bills, which really set them back in a division that, to put it quite simply, isn’t doing well, with no team above .500. They lost the game, which is bad enough, to be sure, but they may have also lost their best player for the final six games of the season.

Reports are that veteran wide receiver A.J. Green suffered what is feared to be a significant injury, a torn hamstring, that is going to cause him to miss time, and perhaps the rest of the season. With a 3-6-1 record through their first 10 games, salvaging the final six—with half of them coming against the Steelers and Ravens—will not be easy.

Green suffered the injury on just the second play of the game, and was forced to leave the field riding on the back of a cart. The All-Pro entered the game third in the league in receptions with 66 and second in yards with 964.

Without him Andy Dalton and the Bengals offense was ineffective, putting up just 12 points. Dalton went just 24 for 43 for 207 yards, throwing one touchdown and two interceptions. He averaged fewer than five yards per pass attempt without his top target.

It was also revealed after the game that Bengals fourth-year running back Giovani Bernard suffered a torn ACL during the game, which is, of course, yet another major blow for a struggling Cincinnati team. They just lost arguably two of their four most important players on offense.

Prior to the game against Buffalo, Green’s worst game of the season came against the Steelers in Week Two, in which he was limited to just two receptions for 38 yards. He has posted four games this season of at least 100 yards, and each of those have gone for over 120 yards. Three of them have been north of 150 yards.

In his sixth season, Green seemed to be in perfect position to easily secure yet another Pro Bowl nod, and perhaps be in the running for a first-team All-Pro designation, but right now he is just thinking about when he is going to see the field again, and right now, we are looking at the prospect of not seeing him play football until 2017.

That is obviously a major blow to a Bengals team that has already more or less seen its season unravel just a year after they won the division with a 12-4 record; it’s also a blow for anybody who truly appreciates the game and the great talents that are carrying out the best traditions of the sport.

For as much as Cincinnati may be host to some of the league’s most unsavory characters—Vontaze Burfict was caught double-fisting middle fingers in the audience’s direction after the loss to the Bills—Green has universally been looked upon as one of the good guys in the game, keeping his nose clean off the field, being an exemplary sportsman on it, and simply dominating the game.

Cincinnati will now face the prospect of trying to finish out this season without any of their top three wide receivers from a year ago, having lost two of the three other than Green in free agency. And without their top pass-catching running back.