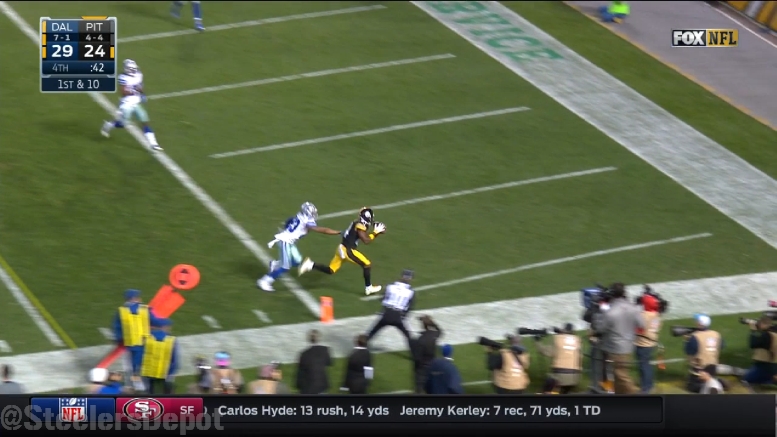 It would’ve been the play of the year for the Pittsburgh Steelers. The one we’d still be talking about this week. Instead, like I wrote on Monday, it’s a footnote.

But Ben Roethlisberger had a chance to explain what led to his Dan Marino fake spike that resulted in a touchdown to give the Steelers a temporary lead.

Talking on his weekly radio show with Ron Cook and Andrew Fillipponi, he credited Todd Haley as the one who pushed him to run a play.

“We were moving down the field and when you’re moving down the field, defensive guys they’re getting tired,” Roethlisberger said. “So I started yelling clock, clock, clock. The defense heard me, the offense heard me, Coach Haley heard me….Coach Haley was in my ear talking to me saying, ‘Don’t waste the down, don’t waste the down!’ He must have said that 20 times from the first time I first started yelling spike it until I snapped the ball.”

Roethlisberger also noted the favorable matchup, one we pointed out in that Monday post, of Antonio Brown working against a cornerback who was only in the game because of injury.

“I also knew their defense was a little tired, they heard me say spike it, spike it, their right corner was a guy that wasn’t in the game a lot. He kinda came in late. I looked at AB and kind of gave him a little nod signal. We did a quick little fake and I threw it to the back and AB did the rest of the work.”

That cornerback was Leon McFadden, who entered the game late after Orlando Scandrick’s injury. And the signal Roethlisberger gave was the grab of his facemask, a subtle message that only he and Brown were aware of. No one else, not the defense, not his running backs, not his offensive line, had a clue of what was going on.

“I was watching film yesterday Le’Veon was standing right next to me and I was wondering, ‘what’s going through his head when he sees me throw the ball.’ Even talking to Pouncey yesterday, he was like, ‘I had no idea you were doing that.'”

It was a great call, recognition, and execution. It should’ve been the play that won the game. It’s a shame.