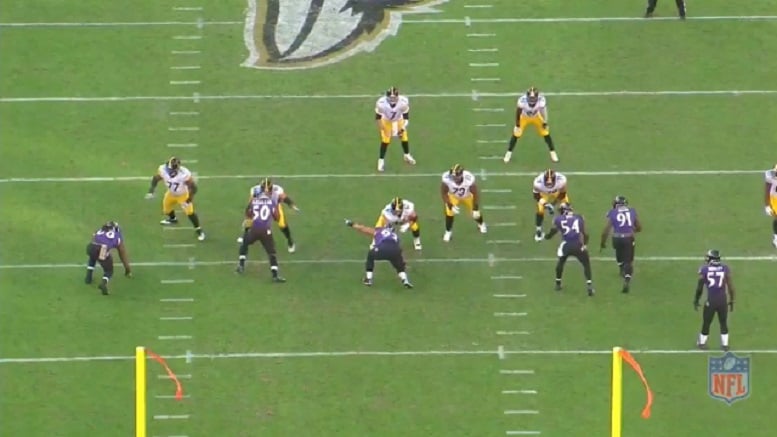 The Pittsburgh Steelers offense had several problems Sunday in their road loss to the Baltimore Ravens and it included the team being penalized a total of 14 yards for 99 yards. Additionally, not only did three of those penalties come because of false starts by the offense, a few snaps seemed to be either early or late. During his Tuesday morning interview on 93.7 The Fan, Steelers quarterback Ben Roethlisberger talked about what led to those kinds of offensive miscues.

“It sounds crazy and we’ll never make excuses, but sometimes it’s just the little things as small as a thing like when B.J. Finney came in – the timing of his head bob,” said Roethlisberger. “It seems so minute, but you’re so use to a certain timing and a certain rhythm and when it’s off a little bit you get false starts. Or a young guy like him being in there having and have to go against that great defense, there were a few occasions that he either snapped it early or snapped it late. And so we got penalties, we got behind the chains a lot, we were in third and medium to third and long a lot.”

B.J. Finney was forced to play early at center in Sunday’s loss to the Ravens due to starter Maurkice Pouncey suffering a dislocated thumb during the second offensive play of the game. While Pouncey did ultimately return to action, he was unable to finish the contest and thus Finney wound up playing 50 of the teams 69 total offensive snaps.

“Unless you play the game, you would never understand this; how significant a rhythm of a head bob is from a center to a guard to a tackle to a tight end,” said Roethlisberger. “I know it seems so small, but Pouncey’s rhythm is different than B.J.’s And B.J. doesn’t get a lot of reps, the silent count in practice, so it’s different and you’re already empty and ready to go and if it’s just a hair off, or like I said, he snapped it one time too early, one time too late, like on a different cadence, it was supposed to be on three, he snapped it on two, or it’s supposed to be on two, he snapped it on three, or whatever. So it’s just those little mistakes prove costly.”

You could see that Roethlisberger was out of sync with Finney right from the start and especially during the offense’s second third down of the game. As you can see below, tackle Alejandro Villanueva is very late out of his stance on that play and it resulted in Ravens outside linebacker Terrell Suggs getting a free hit on Roethlisberger.

“That was one of those plays that was supposed to be on three head bobs and Finney snapped it on two head bobs,” explained Roethlisberger. “So that’s why Suggs got around the corner so quick on Al. No one was quite ready; I’m glad I was just looking for the ball.”

On two of the three false starts the Steelers had against the Ravens, Finney was at center. The first one was on tackle Marcus Gilbert as he flinched and whether or not Finney had something to do with this I do not know.

The last of the three false starts was on guard David DeCastro and as you can see at the tail end of the gif below, he didn’t appear to be too happy with Finney. Both he and Gilbert fired off the line at virtually the same time so odds are good Finney missed this snap count on this play as well.

What about this mishandled shotgun snap by Roethlisberger? Did the quarterback just fumble it, or did Finney surprise him by snapping it too early?

I could probably post a few more examples for you, but I think I have shown already that what Roethlisberger said Tuesday about Finney certainly makes sense.

We’ll have to wait and see if Pouncey can ultimately play Sunday against the Dallas Cowboys. At the very least, being as he’s unlikely to practice much this week, at least Finney should get plenty of time to practice his head bob timing in addition to learning what count the snap is on.