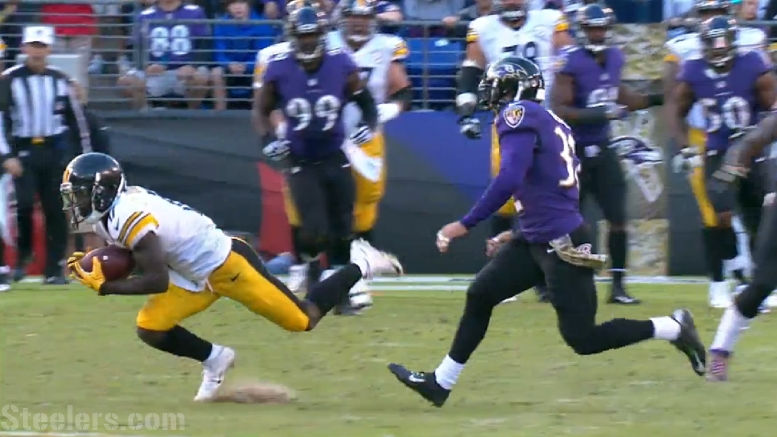 “Others have to step up,” said Brown, according to Jeremy Fowler of ESPN.com.

Brown, who caught 7 passes for 85 yards and a touchdown Sunday afternoon in Baltimore, would go on to explain why he needs help from the team’s other wide receivers on the roster when opposing defenses use two or more players in coverage in an attempt to limit his production.

“They need to find a way to step in, step up and make plays,” Brown said. “It’s been about eight weeks so far, and that’s what we’ve been seeing — double coverage. Today it was triple coverage with a linebacker coming over, and we just have to find ways to win. Other guys have to step up. It just shows that people got respect for me, but we have to find a way to win no matter what they do. It’s all about what we do.”

Brown is exactly right as currently the offense is centered too much around him and running back Le’Veon Bell, who by the way is second on the team in receptions entering Week 10 despite sitting out the first three games of the season due to a suspension. Third on the team’s reception list is tight end Jesse James.

Besides Brown, the Steelers other wide receivers on their roster have pretty much been one-trick ponies. In fact, of the 24 combined third down receptions registered so far this season by Sammie Coates, Eli Rogers, Darrius Heyward-Bey, Markus Wheaton and Cobi Hamilton, 17 of them came on plays that included the football needing to be thrown more than 15 yards past the line of scrimmage in the air.

In defense of Rogers, he’s only played in four-and-a-half games so far this season as he missed two-and-half contests due to a toe injury and another due to him being benched for being late for a team walk-through.

As for Heyward-Bey, he suffered a mid-foot injury during the first half of Sunday’s loss to the Ravens and because of that, might miss an extended amount of games, if not the rest of the season, depending on the severity of his latest misfortune.

Despite being fully healthy on Sunday, Wheaton was one of the team’s seven inactives in Baltimore as head coach Mike Tomlin decided to let Hamilton have his helmet. Hamilton is a great story, but with that said, like Coates and Heyward-Bey, he’s not a possession receiver.

Speaking of Coates, who suffered another drop in the end zone Sunday against the Ravens at a crucial moment in the game, he only has one catch for 4 yards in the Steelers last 3 games. Additionally, prior to those three games, 7 of Coates’ 19 total receptions came via deep passes with 5 others coming courtesy of quick, high-percentage screen passes.

In short, if Brown is expecting help from any of the Steelers wide receivers, Rogers is the most-likely candidate to provide it and out of the slot at that.

Sure, tight end Ladarius Green should provide the Steelers offense another body when it comes to helping Brown, but with that said, he’s still yet to play a single down with his new team.