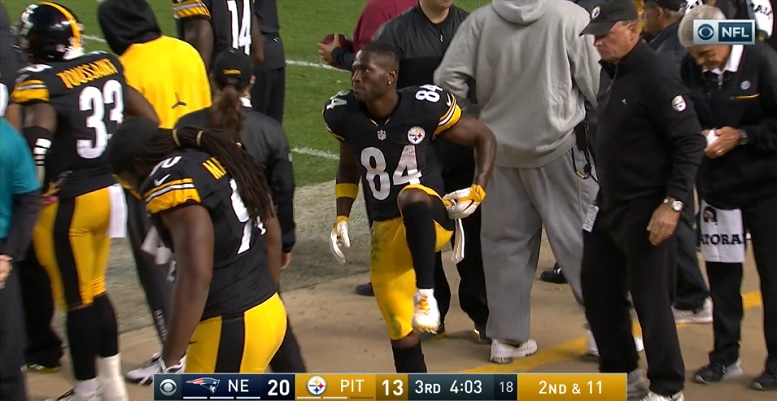 I’m not sure if you’re up for any optimism this Monday morning but I know one person who is: Antonio Brown.

Early Monday morning, he sent out this picture on Instagram.

If you can’t read the caption, it says.

“every setback is the start of a comeback ! This team will not throw in the towel – believe that #callGod”

Brown is keeping the faith after a strong game Sunday. He racked up 14 receptions for 154 yards and a touchdown in the loss, including the near-game winner with 42 seconds remaining.

It’s the third 14+ reception game of his career, making him one of only two players in NFL history to do so. He joins, funny enough, Jason Witten, who has done it four times in his career. He last did so in 2012, catching 18 passes in a loss to the New York Giants. Sunday, Witten hauled in six passes for 59 yards, including a couple crucial ones on their game-winning drive.

For Brown, this 14 reception performance joins two games from 2014, wins over Oakland and Denver.

Jerry Rice, Reggie Wayne, Wes Welker, and Kellen Winslow Sr are examples of players who have all caught 14+ passes twice in a career. Pretty elite company to be surpassing.

Brown is now by himself for 14+ receptions, 150 yards games, this also being his third. No one else has more than two.

He’ll need that optimism to bounce back from this four game losing skid. There is a strong opportunity to do that in a week when the Steelers face off against the winless Cleveland Browns. Those AFC North games are still a challenge but if there’s a team to break out of this funk against, it’s them.

Brown dominated against the Browns in 2015, combining for 27 receptions, 326 yards, and three touchdowns.