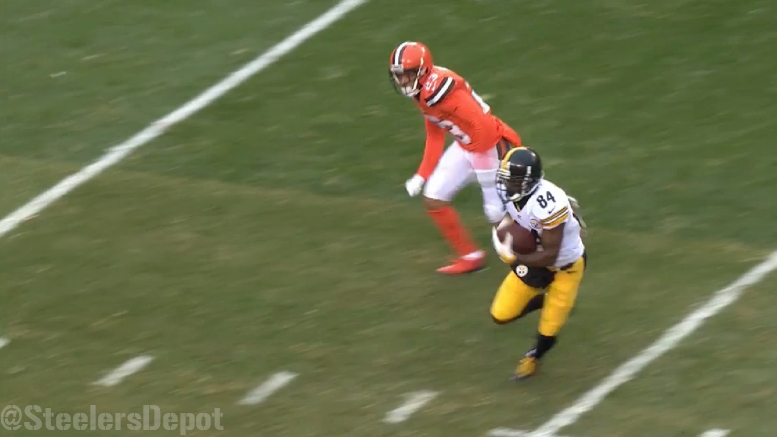 Yesterday, Antonio Brown played in his 96th career game with the Pittsburgh Steelers. In that same game, he caught eight passes, among them the 600th of his career. In doing so, he became the fastest player in NFL history to reach that benchmark, passing Anquan Boldin, who recorded his 600th reception in his 98th game in 2010.

With his 5th catch today, Antonio Brown set an NFL record for the fewest games (96) to reach 600 career receptions. pic.twitter.com/jocVgo9Nxp

What makes this all the more remarkable is that Brown was largely an afterthought in his rookie season, buried on the depth chart as an unheralded sixth-round draft pick. He played in nine games, but he caught only 16 passes. In comparison, Boldin caught 101 passes in 16 games in his rookie year.

Boldin achieved his feat in the third game of his eighth season, in addition, while Brown reached the mark in the 10th game of his seventh season, and he continues to be at the top of his game, so one would have to think that he is going to continue his impressive trajectory, perhaps beyond 1000 receptions.

Boldin, still an active wide receiver, currently with the Lions, joined the 1000-reception club himself last season, and has a chance of cracking the top 10 on the all-time receptions list later on this season. His six receptions yesterday gave him 41 on the season, and puts him at 1050 for his career, just 12 receptions behind the recently retired Andre Johnson.

Speaking of the 1000-reception club, Hines Ward is a part of that group. He is also now a part of what is a two-member group among Steelers who have recorded at least 600 receptions. Only Ward and Brown now have ever reached that mark, though Heath Miller retired needing only eight receptions to get there. John Stallworth finished his career with 537 receptions, fourth all-time in Pittsburgh, but 108th in league history.

With his 76 receiving yards yesterday, Brown also hit dead-even on 8000 career receiving yards. In doing so, he became just the third player in franchise history to reach that mark as well, joining, of course, Ward, but also Stallworth, who from 1974 to 1987 in Pittsburgh gained 8723 yards through the air, averaging 16.2 yards per reception.

Antinio Brown is now the 2nd player in #Steelers history with at least 600 receptions and the 3rd with at least 8,000 receiving yards.

On the season, Brown now has 77 receptions for 907 yards and seven touchdowns. That puts him on pace for 123 receptions and 1451 yards. If those numbers sound like low production to you, then congratulations, you just realized that you’ve been spoiled by one of the great athletes of our generation.

As the years—even the games—tick on, Brown continues to take down more and more achievements and to set himself in groups that hold in their ranks more and more exclusive company. An eight-catch, 76-yard game is a so-so performance for him, and that says a lot.