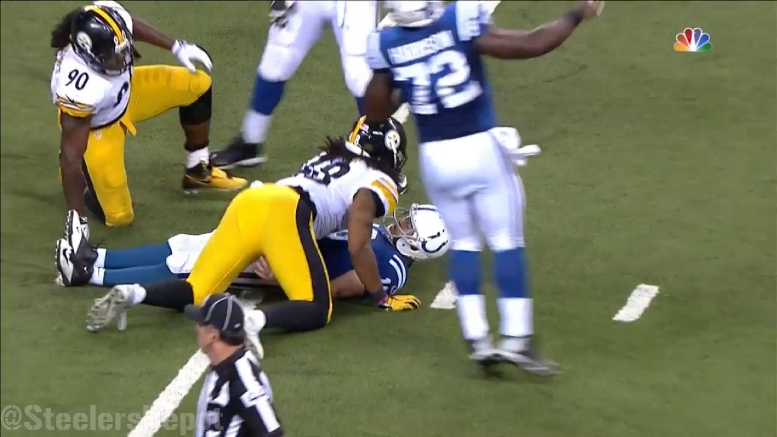 Question: Will Bud Dupree get a bigger slice of the playing time pie after the Steelers’ extended week?

The Steelers activated 2015 first-round outside linebacker Bud Dupree from the injured reserve list two games ago, but he literally saw just a single snap on defense throughout the entirety of his first game back in action.

The reason for that was actually pretty simple—they didn’t need him. The Steelers pass rush proved to be strong throughout that game, registering eight sacks, including one that forced a fumble that was recovered for a touchdown. They didn’t want to mess with what was working in the middle of the game.

Four days later, they bumped him up to playing 20 snaps, which was still a bit less than a third of the total amount of playing time. But in that relatively small workload, he did show some good things, especially considering that it was essentially his first action since last year.

Dupree did record two tackles in the game, and if memory serves, at least one, if not both of them were of the chasedown variety, coming from behind the play, showing his speed and athleticism to make the tackle.

While I haven’t put every one of his pass rushes under the microscope just yet—to be sure, there were times where he looked out of place, getting run up the arc and such—there was at least one play on which he generated pressure, though it was a completed pass.

I think the Steelers are aware that they have nothing special at the outside linebacker position, particularly on the left side. Arthur Moats has been demoted from the starting lineup in each of the past three seasons because he is not really at the level of being a starter. Anthony Chickillo has two sacks and forced fumbles, one of which was the product of somebody else creating the initial pressure.

After getting a good number of snaps on film on Thursday, and having an extended period to evaluate what he did, do the Steelers plan to increase his workload in the next game?