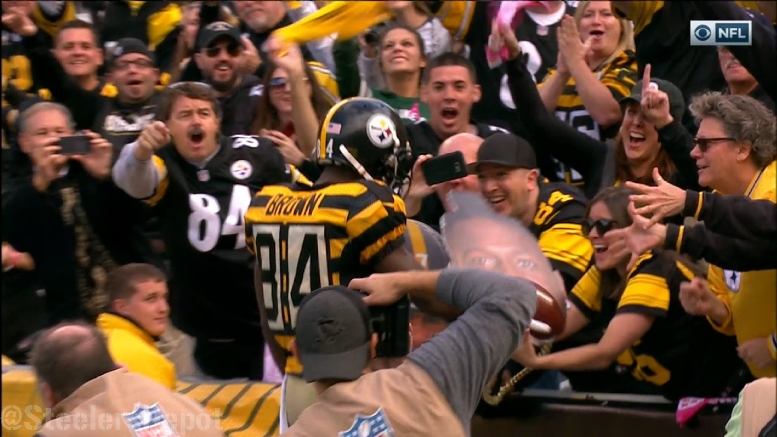 Antonio Brown: Boy, Antonio Brown is having a rough season, isn’t he? Just 48 receptions through seven games, for a mere 592 yards. That is a pace for just 110 receptions and 1353 yards. Those totals are soooo 2013.

I’m being sarcastic, of course. Brown’s astounding production in recent years has wildly distorted our expectations for what constitutes a quality season, and Brown is on pace for one now, especially with his five touchdowns. Never the less, the Steelers do need him to do a bit more than he’s done so far.

Sammie Coates: Through the first five games of the season, Sammie Coates looked like he was rounding out into a nice complementary number two receiver to Brown. He caught 19 passes for 421 yards and two touchdowns in that span and was improving over time, including acting as a legitimate deep threat. He now must get back on track after suffering a fractured finger.

Markus Wheaton: This is not the contract year that Markus Wheaton was expecting. After suffering a shoulder injury in the third preseason game, he has missed four of seven games, and hi first game back saw him drop three passes. He was demoted on the depth chart, but it remains to be seen how that plays out on the field.

Eli Rogers: After sitting out his rookie season with a foot injury, slot receiver Eli Rogers came on strong early, but in back-to-back weeks, after missing two with a toe injury, he dropped a big pass and then was disciplined and held out of their last game. He is yet another Steelers receiver who needs to rebound in the second half of the season.

Darrius Heyward-Bey: While Darrius Heyward-Bey has only caught five passes this year, two have gone for touchdowns of 14 and 31 yards, and he also recorded a touchdown on a 60-yard end-around. While I wasn’t particularly impressed by his performance during his extensive playing time in the last game, the Steelers have promoted him to starter, for whatever that proves to be worth.

Notes: Of note is practice squad wide receiver Cobi Hamilton, who was called up to the 53-man roster two games ago due to the injuries to Wheaton, Coates, and Rogers. He played only a handful of snaps in the first game, but he caught two passes there for over 30 yards at the end of the game, including a touchdown.

He received much more playing time in the Steelers’ last game, and caught another three passes for 36 yards, including two tough third-down catches. While he has played well, he is not guaranteed to stay on the 53-man roster with two players working their way back from injuries that will need a roster spot.