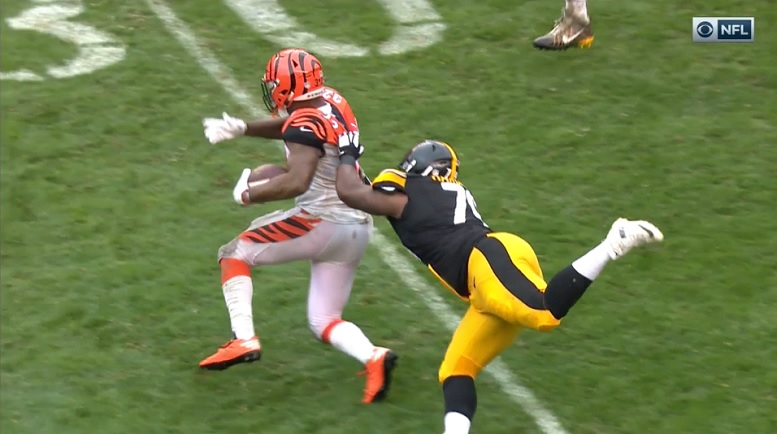 Javon Hargrave: Well, the Steelers only have two nose tackles, and they don’t really necessarily play a whole lot of nose tackle to start with, but it is still notable that their top man on the depth chart at the position is a rookie who was the product of a small school, and while he has not exactly had a huge impact on the season, he has generally acquitted himself well.

Through the first seven games of the season, Javon Hargrave has already approached nearly 200 snaps played. But only 43 percent of his snaps have actually come at nose tackle, with the majority of his play coming in the nickel as a penetrating defensive tackle.

Obviously, the last two games have bumped up those numbers in that regard with the absence of Cameron Heyward. The Steelers primarily play in the nickel defense, and without Heyward, there were plenty of additional snaps for the defensive tackle position to go around.

In addition to mounting a handful of pressures on the quarterback, Hargrave has shown at times the ability to make plays against the run with his athleticism and mobility. He has also made some plays down the field.

Of course the starting nose tackle position sees more time in sub-packages than in what used to be their ‘base’, so Hargrave’s superior mobility was obviously a factor in that decision. But unlike the rookie, McCullers has actually seen the bulk of his time at nose tackle, with 40 of his 62 snaps in the 3-4 front.

And he has played pretty well, overall, with it probably being safe to say that he is having his best season, albeit with an overall marginal impact. He has even gotten a couple of pressures,  but he still struggles to finish plays.

Notes: The Steelers let Steve McLendon walk in free agency after he held down the nose tackle position for three seasons, doing a better job of it than many are willing to give him credit for. But given their devaluation of the position, they elected not to make a substantial investment in him, which he was able to find elsewhere.

With his absence, however, Pittsburgh did turn the position over to some relatively inexperienced players, and it would be fair to say that they have had a bit of a learning curve to contend with, even if the majority of the damage in the running game has been a product of leaky perimeter defense.