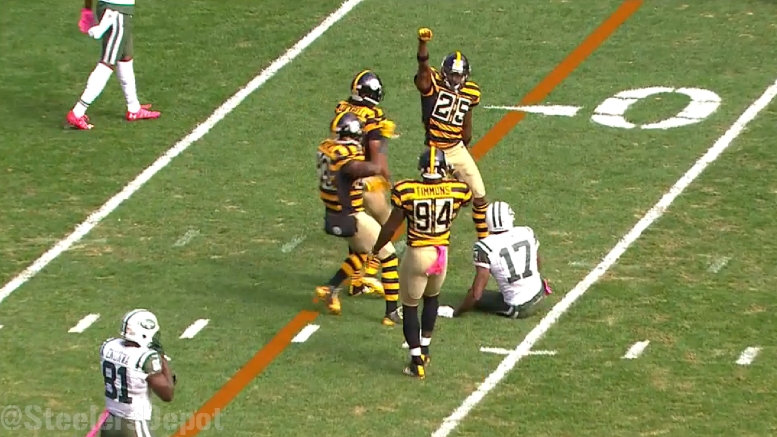 Game notes from the defensive side of the football in the Pittsburgh Steelers’ win over the New York Jets.

– Keith Butler blitzed on 42.9% of the time though a DB came just 9.5%. Mike Mitchell was that man every time, including the final three plays of the game when Pittsburgh ran the same blitz.

– Of those blitzes, 18 in total, only eight of those involved a 5 or 6 man rush. Lot of four man pressure.

– I’m stingy with my target stat but have Ross Cockrell targeted five times against the Jets. Allowed three catches for 43 yards and a touchdown against Brandon Marshall.

– Pittsburgh got 12 pressures in this game. Vince Williams actually led the team with three. Mike Mitchell had two and James Harrison has 1.5. That’s right up there with the 14 pressures they got on Alex Smith two weeks ago.

– Al Hajj-Shabazz played six snaps. Two of them came against the Jets’ 10 personnel, 4 WR sets. The others came versus 11 personnel.

– James Harrison still dropped into coverage on 34.6% of his snaps. Grr.

– Mike Mitchell has gotten to play in the box a lot with Robert Golden out. Ten snaps Sunday. Jordan Dangerfield played 11 in the box.