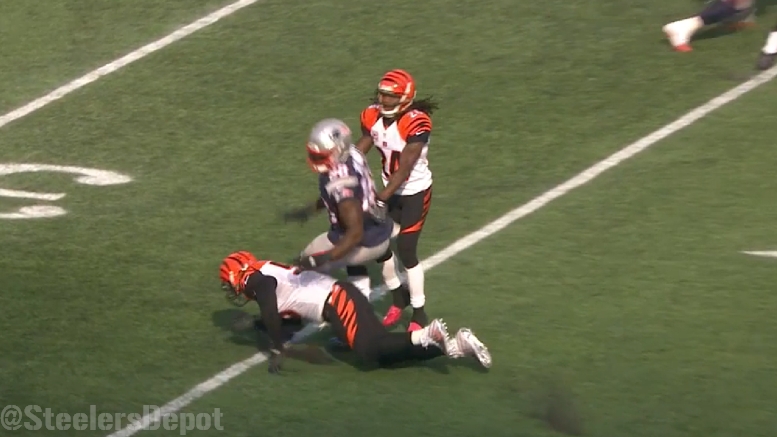 While the Pittsburgh Steelers may have dropped their second game in four weeks, this one another loss of at least two possessions, they can at least take solace in the fact that everybody else in the division lost as well. In fact, everybody else in the division is riding losing streaks of at least two games. The Browns are 0-6, while the Ravens have dropped three in a row after winning their first three.

The Cincinnati Bengals, meanwhile, had dropped to 2-4 in the season, already losing as many games as they did all of last season, losing two in a row and four out of their last five games. And as if that were not enough, their fool of a linebacker, Vontaze Burfict, is continuing to raise eyebrows and voices for his conduct on the field.

Although he was not penalized on the play, Burfict was seen going low on a hit on Patriots tight end Martellus Bennett on a play in which Bennett was not even a target. Replay shows that Burfict really went low, almost like a sinking missile, clipping the big tight end below the knee and taking out his legs.

The New England man was fortunate to escape further injury than he appeared to suffer at Burfict’s hands, but his teammates were not soon to forget what the previously suspended linebacker did. Later on in that same drive, Rob Gronkowski drew a taunting penalty, and the two got up in front of each other just one player earlier than that, after the Patriots tight end stood over an injured Bengals teammate. Burfict butted heads with Gronkowski as he stood there after making a 29-yard reception.

For his part, Burfict is said to have apologized to Bennett after the game for hitting him low. New England beat writer Ben Volin Tweeted that the two exchange “a high five/bro hug before heading to the locker room”, also noting that there was “no love for Gronk”. But Tom Pelissero also quoted Bennett as saying pretty clearly that he believes Burfict’s hit was low, and another since-deleted Tweet even quoted him as suggesting that Burfict “probably did” mean to hit him low after the linebacker told him otherwise.

Given the nature of the attention that this incident received, it would not be surprising at all if Burfict ends up accruing a fine in the middle of the week for this hit away from the play. Obviously, this would not be the first fine that the veteran linebacker has accumulated over the course of his career due to the way that he plays the game, which is often outside of the rules.

Considering the fact that the Bengals are not winning, one can’t help but wonder if they might have a shorter leash for Burfict’s conduct. It is easier to make excuses for somebody who is contributing to a winning team, but they have only won one of three games since he has come back from a three-game suspension.

Vontaze Burfict going low on Bennett. Seemed unnecessary but what do I know. #Patriots pic.twitter.com/4DWnqa76TD