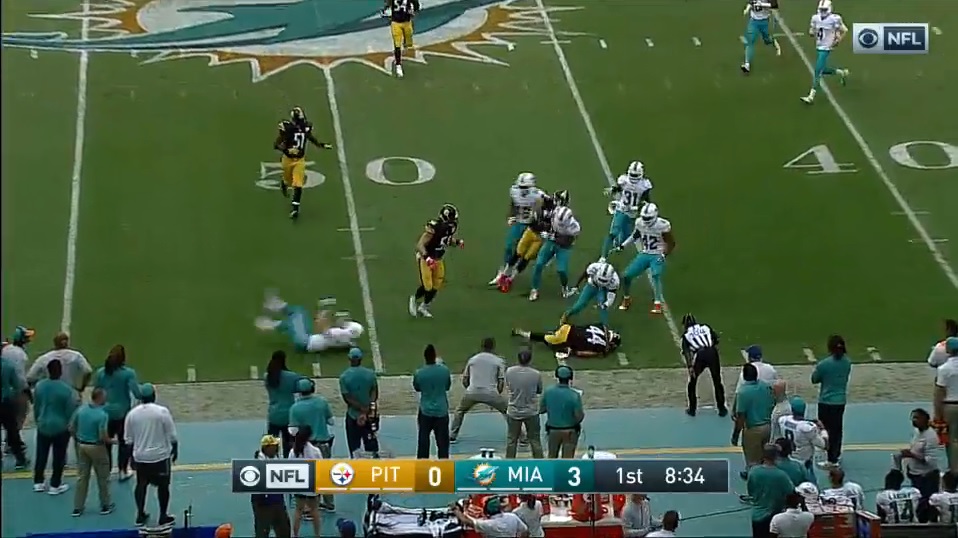 He’s the man giving us a glimmer of hope during some dark times. The little bit of good in an otherwise bad situation. The man in red.

Tyler Matakevich is the Pittsburgh Steelers’ version of Ken Bone.

One of the few bright moments from their loss to the Miami Dolphins’ Sunday was a play that didn’t end up counting. After notching their first points of the day, Miami attempted a surprise onside kick. Matakevich recovered it, seemingly giving the Steelers excellent field position, but it was ultimately waved off by the refs who claimed they weren’t ready.

But that doesn’t change the high IQ the rookie linebacker showed and Danny Smith pointed it out speaking to Bob Labriola on Steelers Nation Radio.

Pittsburgh would’ve had the ball at about the Dolphins’ 46 in a 3-0 game. It’s impossible to say but perhaps that would’ve changed the complexion, and outcome, of the game. To be fair, the Steeleers would still find the end zone on the drive and take the lead.

Smith and Labriola agreed the refs explanation didn’t seem to mesh with what the tape showed.

Matakevich would wind up replacing an injured Vince Williams at the end of the third quarter and amazingly, lead the team for the day with nine total tackles. At one point, he was credited for a tackle on six consecutive plays. He’ll be buried on the depth chart once Ryan Shazier comes back but gave another indication inside linebacker is one of this team’s deepest positions.