For the 9th time in 12 seasons, the Pittsburgh Steelers find themselves without the services of franchise quarterback Ben Roethlisberger as he is currently expected to miss 2-6 weeks after undergoing meniscus surgery on his left knee. The Steelers have composed a 10-9 record in games that Roethlisberger has missed since 2005, including a competitive 2-2-mark last season

Last year’s four-game stretch without Roethlisberger allows the closest observation into the Steelers’ offense since the pieces are fairly similar. When looking at the Steelers offense, two main points begin to stand out – the Steelers lack of possession of the football and a low 3rd down conversion percentage.  For the Steelers to have any chance to compete with the high-power New England Patriots, they will certainly have to improve on these two parts of the game.

Consider this, the Steelers only had six drives longer than 4 minutes in the four games without Roethlisberger last season. Adding on to these woes, in that same four-game stretch, slightly more than 50% of the Steelers’ drives featured 4 plays or less with 25 of 49 drives stalling after 4 plays or fewer. Obviously, the Steelers and quarterback Landry Jones cannot afford to continuously give the ball back to the Patriots or they will face an insurmountable deficit early.

Without Roethlisberger, the Steelers lose a big part of their game which is converting on 3rd down. So far this season, the Steelers rank 1st in the AFC with a 45.9% 3rd down conversion rate, a number that will surely decrease without their starting quarterback’s ability to extend plays. Now it goes without saying that no one is expecting Jones to convert nearly half of all 3rd downs but an improvement over the 31% conversion percentage posted by the Steelers without Roethlisberger last season is a must.

Looking at Jones’ first start last season against the Kansas City Chiefs shows a very conservative approach on 3rd down that led to a 2 of 10 conversion rate. 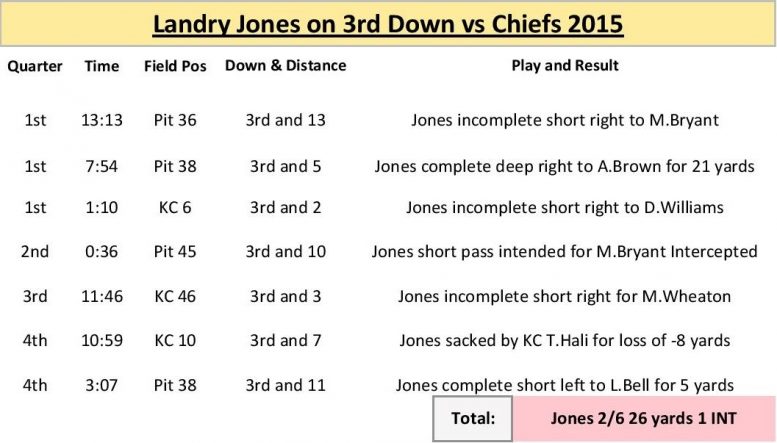 Out of Jones’ seven third down pass attempts, one was converted, four fell short of the sticks and two ended with a sack or interception. The word “short” is used to describe 5 of 7 passes, meaning that both Steelers and Jones must recognize that for any shot at competing with Tom Brady, they must be more aggressive on 3rd down.

Time of possession and converting 3rd down are certainly two important aspects for the now Jones-led Steelers but it will take a contribution all-around to have a shot at winning. Running back Le’Veon Bell averaged 112.3 rushing yards per game without Roethlisberger last year. A continuation off this not only improves possession time, but also helps to make 3rd down more manageable.

While many may find it hard to believe Jones’ cliché “Don’t Panic” phrase, there are definitely options available to ease the anxiety. An improvement on time of possession and 3rd down would certainly alleviate some of the ‘panic’ in the air over Heinz Field this Sunday.