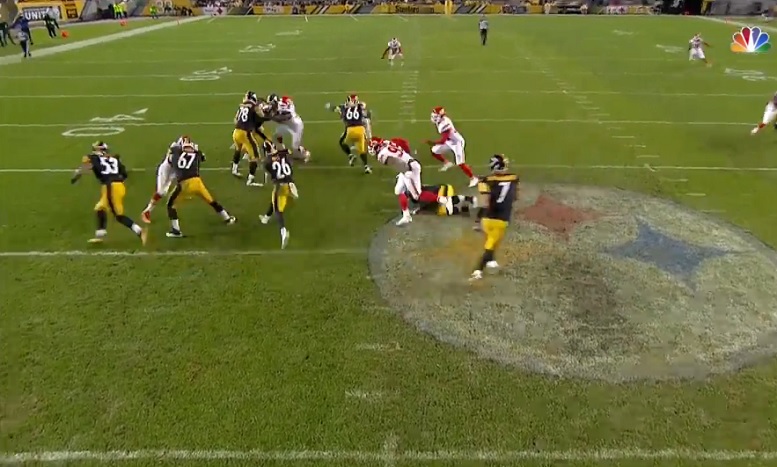 The Pittsburgh Steelers easily took care of the Kansas City Chiefs Sunday night at Heinz Field and below are my choices for the top ten game-defining plays.

10 – Kansas City was moving the ball on their first drive until on 2nd and 10 Steelers defensive end Cameron Heyward bull-rushed through the line of scrimmage and tallied the first sack of the night, giving the defense a much needed pass rush and setting up a 3rd and long that the Chiefs could not convert.

9 – Approximately five minutes into the 3rd quarter with the Steelers up 36-0 the offense was trying to assert the running game and run the clock out. On 2nd and 3 they came out in 21 personnel, using tight end David Johnson as a fullback, Le’Veon Bell as the tailback, and Jesse James as the tight end. Bell broke off a 24 yard run right behind backup guard B.J. Finney who had a great game and blocked the much bigger Chiefs defensive tackle Chris Jones.

8 – Three minutes remained in the 3rd quarter the Steelers were still nursing a 36-0 shutout when on 2nd and 8 Chiefs quarterback Alex Smith decided attack down field to receiver Tyreek Hill, a rookie that the announcers claimed was one of the, if not the fastest player in the NFL. Steelers cornerback and 1st round draft pick Artie Burns drew single coverage on Hill. The two rookies streaked down the field on a go route, and while Hill did manage to get a step on Burns, Burns was able to recover and use his length to break up the pass attempt. Artie Burns is developing right before our eyes.

7 – With two minutes remaining in the first quarter the Steelers took over at the Chiefs 40-yard line due to Chiefs punter Dustin Colquitt shanking a punt that traveled only 23 yards. On 2nd and 8 Ben Roethlisberger executed a play fake and took advantage of man coverage on Antonio Brown. The result was a 38-yard touchdown pass to Brown on a deep skinny post. This was Ben Roethlisberger’s third touchdown on as many passes and stretched the Steelers lead to 22 points by the end of the first quarter.

6 – On the Steelers opening drive of the 2nd half the Steelers came out in 13 personnel with all three tight ends lined up to one side.  On 1st and 10 Roethlisberger executed a play action fake to Le’Veon Bell and threw a bullet to tight end Xavier Grimble. The play resulted in a first down and showed that the Steelers passing game is proficient out of running formations and that offensive coordinator Todd Haley isn’t afraid to throw to all three of the Steelers’ tight ends. On the next play Steelers back Le’Veon Bell ran right behind Finney who flattened the Chiefs pro bowl linebacker Derrick Johnson. The play only resulted in a gain of four yards but it was a microcosm of Steelers attitude throughout the game.

5 – Pittsburgh’s defense played with tenacity all night. Chiefs running back Spencer Ware was stripped by Stephon Tuitt on the first play of their 2nd drive of the night. The ball rolled right to cornerback Ross Cockrell, who made the recovery, setting up the Steelers offense at the Chiefs 32-yard line.

4 – This is two consecutive plays, but they so accurately illustrate the on-field-play of the Steelers defense, I had to use them both. The Chiefs began moving the ball through the air with about five minutes left in the first half. On first down Steelers inside linebacker Vince Williams, who started in place of Ryan Shazier met Chiefs running back Knile Davis in the backfield on an outside zone run for a loss of two yards. On the very next play the Chiefs threw a wide-receiver screen to Tyreek Hill. Fellow receiver Chris Conley executed a beautiful block on Steelers corner Ross Cockrell, taking him off his feet and out of the play. But all of the effort was for nothing as Williams attacked the screen aggressively and wrapped up Hill. The play resulted in a 1-yard gain, and a 3rd and long that the Chiefs couldn’t convert.

3 – After the Steelers stalled out on the first drive and were facing a 3rd and 9 on their second drive. Roethlisberger did more than convert for a first down, he threw a 31-yard pass with touch to receiver Darrius Heyward-Bey who was all by himself on a deep crossing route and cruised into the end zone to open up the scoring for the night.

2 – Chiefs quarterback Alex Smith tried to set up a screen pass on 1st and 10 from the Chiefs 26-yard line with 5:26 remaining in the first quarter. Instead of an easy completion, Cameron Heyward managed to get a hand up WHILE GETTING BLOCKED and deflecting the pass into Steelers outside linebacker Jarvis Jones’ hands. Jones returned the ball to the Chiefs 2-yard line, which set up the second Steelers touchdown of the night. A pitch and catch from Ben to Antonio Brown.

1 – On 3rd and 4 with 8 minutes remaining and the Steelers ahead 36-7 the offense was feeding Le’Veon Bell, who was back from a three game suspension. Left tackle Alejandro Villanueva and tight end Jesse James blocked down while Finney and pro bowl center Maurkice Pouncey pulled to kick out defenders. Finney kicked out Chiefs pro bowl linebacker Tamba Hali as Bell found an alley between Villanueva’s and James’ blocks. Pouncey didn’t have anybody to block and turned up field like the experienced lineman he is trying to protect the weaving Bell. The end result was a 44-yard gain that took the Steelers offense down to the two-yard line and emphatically announced to the NFL that Bell is back and in top form.