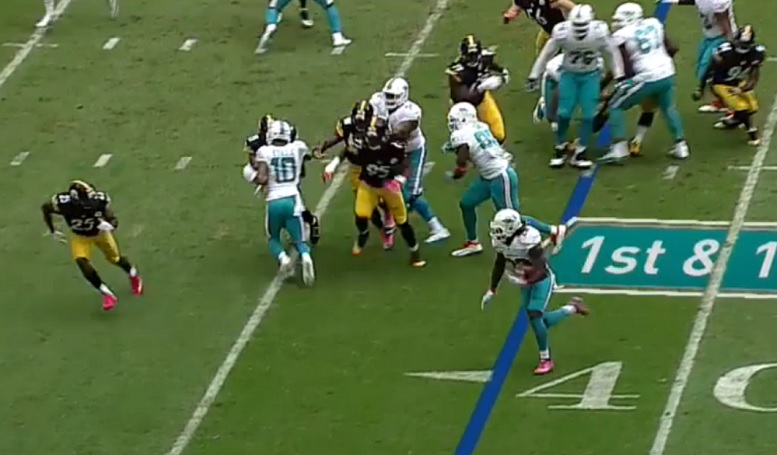 In Sunday’s road loss to the Miami Dolphins, the Pittsburgh Steelers defense gave up 222 rushing yards on 36 attempts as they were gashed in all three directions mostly by running back Jay Ajayi, who ended the game with 204 yards on 25 carries. On Tuesday, Steelers head coach Mike Tomlin was asked to talk about what went wrong with his run defense against the Dolphins.

“I think just as the game wore on, we wore down,” Tomlin said. “They had some explosion plays that bounced to the perimeter. We’ve got to do a good job of setting edges on our defense, but just largely, if I had to summarize it in a nutshell, I thought we wore down as the game wore on and a lot of that had to do with the total number of snaps and the time of possession, or our lack of possession.

The Steelers came into Sunday’s game having only allowed 11 runs of 10 yards or more but gave up eight such runs to the Dolphins on Sunday. Ajayi’s first two carries of the game went for 12 and 10 yards respectively and he ended the first half with 51 rushing yards on 11 carries.

The Steelers were without the services of defensive end Cameron Heyward on Sunday against the Dolphins as he missed the game with a hamstring injury. Tomlin was asked Tuesday how the rest of the defensive line looked without having Heyward on the field.

“We didn’t make enough splash plays,” Tomlin said. “We didn’t come off of enough blocks and weren’t productive enough in the run game. Didn’t create enough disruption in the passing game, but that didn’t happen in a vacuum. I think those type of assessments can be descriptive of just about anybody that you would ask about.”

Tomlin was asked Tuesday if he expects teams moving forward to start spreading his defense out in order to run against them based on what happened Sunday against the Dolphins.

“I got no control over what New England does,” Tomlin said. “I doubt New England formulates their plan based on what others have done. I think generally, they stick to their script and their personality and their comfort zone. But, yes, certainly that’s something that people are capable of gleaning from that video.”

The Steelers will play the New England Patriots Sunday at Heinz Field and once again they won’t have Heyward as Tomlin ruled him out for the game on Tuesday. The Patriots enter Week 7 having averaged 3.8 yards per carry on offense and their led by running back LeGarrette Blount, who has 439 yards and 6 touchdowns already on 119 carries. Tomlin talked Tuesday about the Patriots running game ahead of Sunday’s contest.

“They’ve got an awesome running back combination in Blount and [James] White and they function in a way that their running back tandems have functioned in the past, Tomlin said. “Thunder and lighting, if you will. It seems like they’ve always had a big guy ala [Corey] Dillion or a small guy, ala [Kevin] Faulk, over the years and this tandem is doing the job for them.”

The Steelers better fix their run defense in a hurry and that will be a chore this week being as Heyward won’t play against the Patriots. If they can’t bottle up Blount and James White on early downs on Sunday and force Patriots quarterback Tom Brady to convert a large number of long third downs through the air, the Steelers defense will once again get wore down in the second half and it could result in not only another loss, but another blowout loss as well.