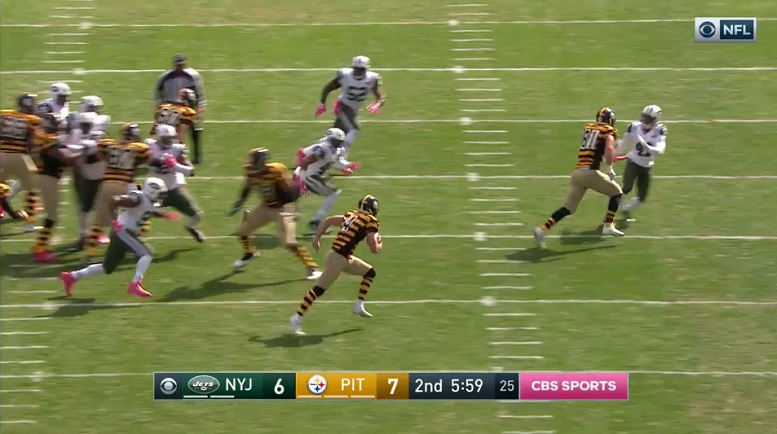 If you’re like me, the fake field goal play the Pittsburgh Steelers attempted to run Sunday against the New York Jets probably caught you by surprise. With that said, the Jets players who were on the field for that particular play didn’t look surprised at all as they easily shut it down and that included New York safety Rontez Miles tacking punter Jordan Berry for a 3-yard loss.

After the game was over, Steelers head coach Mike Tomlin was asked if he saw something the Jets had done that led to him making the decision to run the fake field goal play.

“I did, but again, like I said, they’ve [Jets] got a good plan so I got to tip my cap to them. Those guys, they did a few things in all phases that were a little bit different than maybe we anticipated at the early going. And so I accept responsibility for that call, but I also tip my cap to those guys for keeping us on our toes in all three phases there at the early portions of the game.”

While the call can easily be criticized because it didn’t work, it probably would have been lauded by a large group of the team’s fan base had Berry succeeded in getting the first down. However, as it turns out, had Berry been able to run down the right side for a first down, the play wouldn’t have stood as tackle Alejandro Villanueva was flagged for an illegal formation being as he was lined up too far off of the line of scrimmage.

The Steelers were ahead 7-6 at the time and the easy call for Tomlin to make was to let kicker Chris Boswell attempt a 46-yard field goal. Once the play was sent in, however, Berry probably had the authority to kill it had he seen the Jets do something that he didn’t expect.

It was an unfortunate outcome and it ultimately resulted in the Jets driving 69 yards for a go-ahead touchdown. With that said, being as Tomlin doesn’t often live in his fears, I doubt this will be the last time we’ll see a fake field goal not be successful during his coaching career in Pittsburgh. It happens.