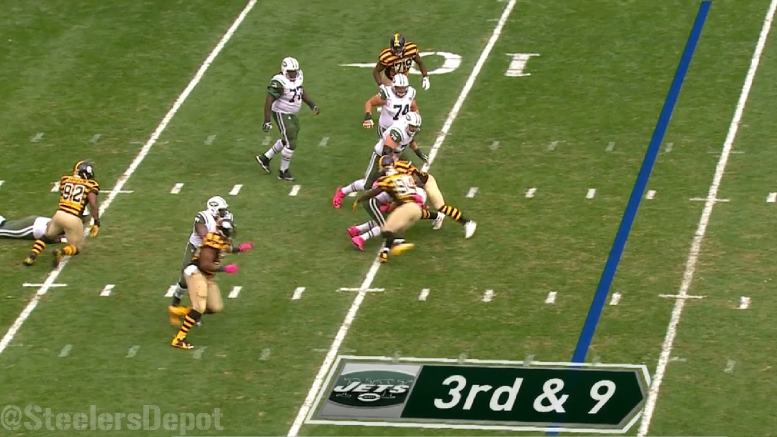 Do you know what the Jets were pretty terrible at doing yesterday? Converting on third down. That more than anything was the reason that their offense was virtually shut down by the Pittsburgh Steelers’ defense in the second half, despite moving the ball fairly well throughout the majority of the first half.

In fact, they managed to pick up 13 points in the first half primarily by avoiding getting into third-down situations for an extended period of time. For the game, the Jets converted on just two of 11 third-down opportunities, about both successful conversions came on their first three drives, in five attempts. They did not face a third-down situation on their lone touchdown drive.

In the second half? If you haven’t figured it out already, they were blanked, going without a successful conversion on six opportunities, which is why the furthest that they ever even got in the entire span of the second half was the Steelers’ 49-yard line, one time. They ran exactly one play on offense in the Steelers’ own territory throughout the second half.

In fact, they failed to even get a first down on three of their second-half drives, and another drive lasted only four plays. It helped that they were generally kept in unfavorable circumstances in terms of down and distance, but there was even a third-and-one situation mixed in there which they were unable to make good on.

One big moment came on third and 11 on that drive on which they crawled beyond midfield—which resulted in a one-yard loss to push them back to the 50. From there, on that third-down play, Ross Cockrell did an excellent job of defending a pass away from Brandon Marshall in order to prevent the Jets from converting in what was at that time a 17-13 game.

On the Jets’ next drive, a check-down pass to the running back on third and nine almost gained the necessary yardage to get the chains moving, but the ball carrier’s knee touched down a yard shy of the first-down marker. Early in the fourth quarter and down then 24-13, New York elected to punt instead of going for it at their own 29.

Another third-down pass intended for Marshall ended the Jets’ next drive that followed, with Fitzpatrick firing low while under pressure from the Steelers’ defense. The veteran wide receiver was not able to scrape the ball off the grass before it touched down.

The game ended with Fitzpatrick firing four consecutive incomplete passes to his slot receiver and running back, as they racked up their total of failed third-down conversions to nine on the day in 11 attempts.

Overall, the Steelers have remained strong in situational football, holding third-down conversion rates down, while doing a fair job in the red zone as well, particularly when it hasn’t been in garbage time, as was the case last week. The Jets went just one-for-two beyond the 20-yard line yesterday.