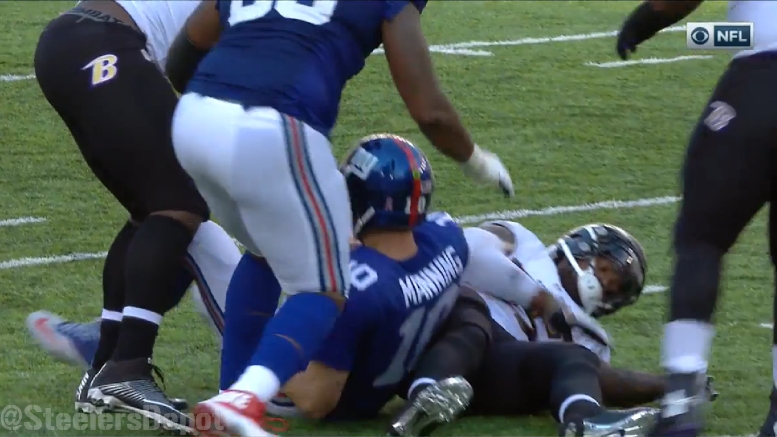 When it comes to injuries, the Baltimore Ravens really can’t seem to get out of their own way over the course of the past two seasons. While Pittsburgh has given them a run for their money on the injury front, I think the Ravens’ injury stockpile would compare ‘favorably’ to any other team in the league in that span.

The latest injury is to veteran outside linebacker Terrell Suggs, who suffered a biceps injury while recording a sack in the fourth quarter of the team’s loss to the Giants on Sunday. While the team doesn’t believe that the injury will end his season by any means—they even seem to think he will be back soon—the feeling is that it would be a stretch for him to play on Sunday.

Suggs has actually dealt with a biceps injury previously, just a couple of seasons ago, late in the 2012 season, and he ended up playing through the injury, choosing not to have surgery during the season so that he could stay on the field, and, of course, that was the year that the Ravens ended up winning the Super Bowl.

This biceps tear is in the opposite arm, so it is not a perfect comparison, but Suggs only missed one game following that injury—he began the year on the PUP List after he tore his Achilles during the offseason—but he was not particularly effective. Of course, he wasn’t very effective before that either, recording only two sacks, though he did have two sacks in the Divisional round.

While he did not start on the PUP list this time around, Suggs once again did not start off the 2016 season healthy, even though he did manage to get back for opening day at less than full strength. And the veteran has been successful so far this year.

Through six games, Suggs has picked up 19 tackles to go along with five sacks. Having him sidelined is going to be a burden on a Ravens defense that has been the primary season that the team had success early in the season, though they have now dropped their last three games to fall to 3-3.

Exacerbating the issue is that his bookend pass rusher, fellow veteran Elivs Dumervil, is also dealing with an injury that could sideline him for an extended period of time. He has been dealing with a foot injury for about a year now, which he played through last year, limiting his effectiveness.

It seemed as though he and the team felt they got it under control at some point, but he has so far been limited to action in just two games, and he hasn’t even recorded a statistic yet. At least for now, the Ravens are going to have to rely a lot upon their depth, which includes a couple of rookies and a second-year man, none of which have yet notched a sack this season.