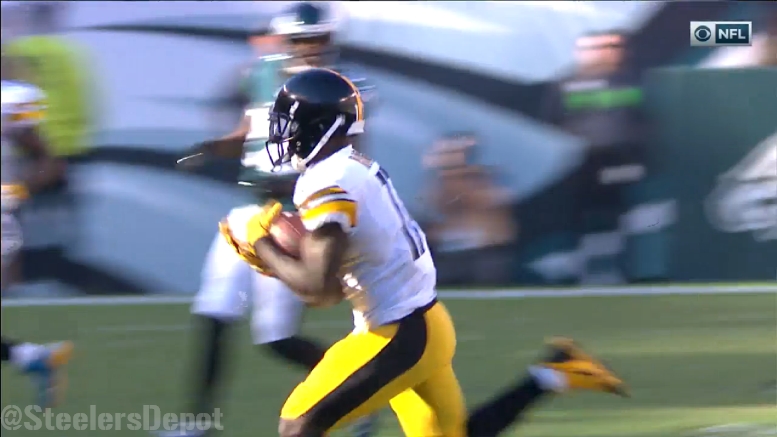 If you’re like me, you were probably surprised that Pittsburgh Steelers wide receiver Eli Rogers didn’t play a single snap in Sunday’s home loss to the New England Patriots even though he did dress for the game. I initially figured that Rogers reinjured his toe during warmups prior to the game, but that turned out to not be the case at all.

On Tuesday, Rogers confirmed that him not playing Sunday against the Patriots wasn’t injury related and indicated it was a coach’s decision, per Mike Prisuta of DVE Radio. The second-year wide receiver reportedly wouldn’t elaborate on the subject when asked about it Tuesday.

Prisuta wonders if Rogers may have broken a team rule during the week leading up to the game. If that indeed was the case, it’s unfortunate as the Steelers offense probably could have used the former undrafted free agent out of Louisville.

Keep in mind that fellow wide receiver Markus Wheaton was inactive Sunday with a shoulder injury in addition to wide receiver Sammie Coates being very limited against the Patriots because of his broken left index finger. If that wasn’t enough, wide receiver Antonio Brown played sporadically in the fourth quarter after injuring his quad. In short, backup quarterback Landry Jones could have probably used Rogers in the passing game Sunday.

Rogers now enters the team’s bye week with 13 catches for 135 yards and a touchdown on the season but has only caught 4 passes for 35 yards in the Steelers last four games of which two he missed due to a turf toe injury.

When the Steelers return to action in Week 9, they will play on the road against the Baltimore Ravens and it will be interesting see if Rogers is back in his role as the team’s starting slot wide receiver. It will also be interesting to see if Steelers head coach Mike Tomlin is asked a week from today about what led to Rogers essential benching when he takes questions during his weekly press conference.