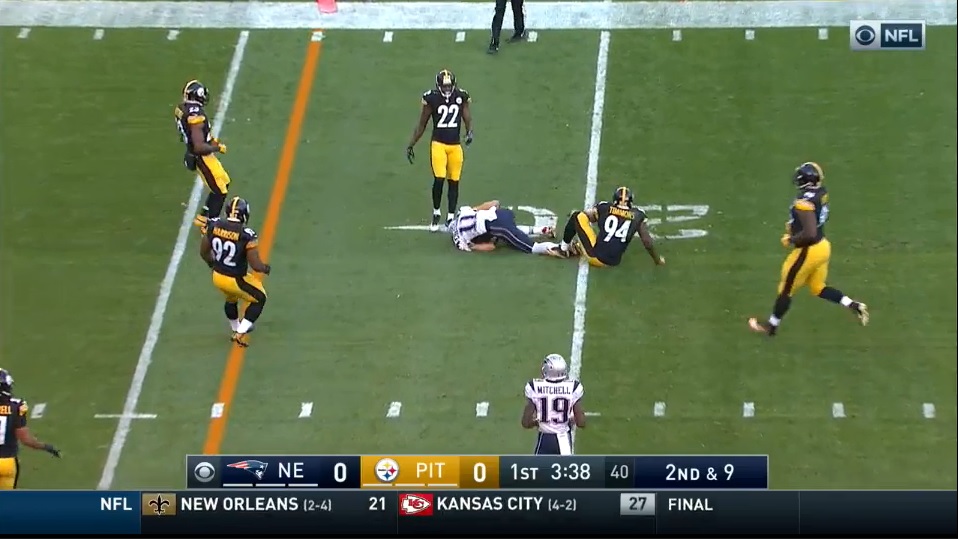 Well, it wasn’t as bad as many expected Sunday afternoon at Heinz Field against the New England Patriots.

Without Ben Roethlisberger and Cameron Heyward, the Pittsburgh Steelers put up a respectable fight against the Patriots in a game that — if we’re being fully honest about the game as a whole — should have been won by the men in black and gold.

Alas, the Steelers came up short in a 27-16 loss to Tom Brady and Co., so like I do every week, I’ll dive into the positional grades for the Steelers.

I’m sure this grade will cause a lot of fans to stop reading because they don’t agree with it, but whatever. It’s easy to blame Landry Jones for the loss to the Patriots because he’s not Roethlisberger and it changes the dynamic of the offense as a whole, but Jones played reasonably well against New England in place of Big Ben.

On the day, Jones threw for 281 yards, one touchdown and one interception on 29-for-41 attempts while orchestrating drives up and down the field throughout the game.

Outside of the bad interception to Malcolm Butler in the end zone in the first quarter and some poor throws in the red zone, I felt that Jones never really looked overwhelmed and did what he needed to do to keep the Steelers in the game.

I’m sure that won’t fly with Steelers fans this morning though.

What more can you say about Le’Veon Bell? I mean, honestly, the guy just does everything so incredibly well.

Against New England, Bell ran the ball 21 times for 81 yards against a good Patriot front seven and added 10 receptions for 68 yards out of the backfield, providing Jones with a security blanket on check downs when facing the rush.

Overall, Bell was his usual self with patience and his ability to make defenders miss, but was just unable to come up with the game-breaking play we’ve become accustomed to.

Antonio Brown returned to form against the Patriots by hauling in seven passes for 106 yards, including a season-long of 51 yards despite having Jones under center instead of Roethlisberger.

Outside of Brown, I liked the performances overall by Cobi Hamilton (3/36) and Darrius Heyward-Bey (3/30/1) against New England, but after DHB’s early TD, it took awhile for Hamilton or any other WR to emerge for Pittsburgh to take some heat off of Brown.

Sammie Coates continues to deal with a finger injury and has been rendered obsolete the last two weeks because of it, while Eli Rogers was invisible, not even receiving a target.

Jesse James is becoming a real problem as a blocker in the running game; he often looks lost and when he makes contact he’s very hesitant to be physical.

When he’s not catching passes (just two receptions for 18 yards Sunday), he’s largely useless, which is tough for me to say because I like the second-year tight end a lot.

It’s very clear his blocking needs work, so it’s important to be patient, but Sunday was a poor game for him.

Xavier Grimble had position-high five targets in the game, but was only able to come down with two of them for 14 yards against New England. Grimble is really emerging as a solid move TE, but his value is low without Roethlisberger.

David Johnson continues to prove his worth as a blocker, and any pass he catches (1/5) is an added bonus.

Overall, not a strong performance by the position whatsoever, and it starts at the top of the depth chart.

A much, much better performance by this unit up front compared to a week ago against the Dolphins.

The offensive line kept Jones clean all game, not allowing a sack while rushing for 4.3 yards per carry against New England.

I liked the way guys like Maurkice Pouncey, Alejandro Villanueva and David DeCastro bounced back this week, but man alive is Chris Hubbard the definition of below average as a tackle.

His holding call on Jamie Collins in the second quarter negated DHB’s second TD of the game and really changed the tide of the game as Chris Boswell missed the field goal two plays later.

It’s pretty clear how big of a crater Heyward’s absence leaves in the front seven as for the second straight week the Steelers were gashed all game long in the running game, this time by LeGarrette Blount for 127 yards and two touchdowns.

Stephon Tuitt played at a high level throughout the game and did his part to keep it together, but Ricardo Mathews has had a rough go of things the last two weeks, while LT Walton got manhandled when on the field.

Javon Hargrave has largely been a disappointment the last two weeks, but that was to be expected as teams started focusing on him up front in place of Heyward.

The bye couldn’t have come at a better time for this team.

I feel bad for Lawrence Timmons; I really do.  Over the last two years Keith Butler has really left him out to dry in coverage at times, and Sunday against Julian Edelman was no different.

Timmons was once a speedy, new-age linebacker that could cover TE’s and some slot receivers, but that time has come and gone, but the coaching staff doesn’t seem to notice. Baffling.

With Timmons struggling in coverage, the rest of the LB group had to step up, and for the most part only one guy did:  Jarvis Jones.

That man came to play today and largely ate Nate Solder’s lunch in the second half, repeatedly getting pressure on Brady off the edge. Maybe this was the game where everything clicked as a pass rusher for Jones. We’ll see.

Anthony Chickillo continues to get whooped on the edge, while Arthur Moats added another easy touch sack to his stats total this season.

Vince Williams and Ryan Shazier split time in Shazier’s return and neither looked all that good against the run.

Robert Golden had a really, really rough day trying to cover Rob Gronkowski, getting beat for a 36-yard touchdown and a 37-yard catch-and-run in the second half.

William Gay had some really poor tackling attempts in the open field, while Artie Burns got hit with a dumb penalty in the second quarter, leading to a New England touchdown to go up 14-0.

Mike Mitchell really wasn’t his physical self and didn’t help out in the run game as expected, while Sean Davis may have had a blown coverage assignment on Gronkowski’s touchdown to open the second half.

The yardage totals are nothing to be ashamed of, considering what Brady did in his first two weeks back from suspension, but the bend-but-don’t-break mentality is getting old fast.

Boswell missed two field goals — including a 54-yarder that never should have been attempted on a 4th and 2 in New England territory. The Wizard of Boz looked shaky for the first time in his Steelers career, but fortunately bounced back to hit 3-of-5 field goals in the loss.

Jordan Berry was outstanding punting the ball, averaging 48.8 yards per punt on the day, while veteran long snapper Greg Warren came up with a big fumble recovery on an Edelman fumbled punt return, setting the Steelers up in great field position (they did nothing with it unfortunately).

Both return games were mostly bland outside of Justin Gilbert’s nice 32-yard kick return, and I had some issues with Brown’s decision to let some punts bounce inside the 20-yard line where he got lucky they rolled for touchbacks.