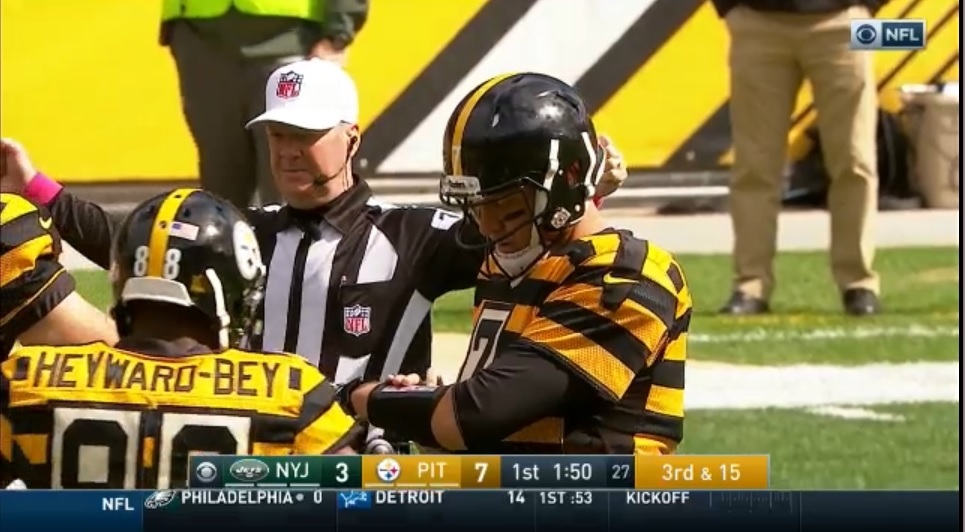 Your AFC North leading Pittsburgh Steelers. Has a nice ring to it.

Ben Roethlisberger: Another spectacular game and would’ve looked even better if Sammie Coates didn’t drop several passes. There was the red zone fumble turnover but that was merely a blip on an otherwise remarkable day. At one point, Roethlisberger completed 14 consecutive passes and finished with four touchdowns, no picks, and a cool 380 yards.

He’s now thrown nine touchdowns over the last two games and completed over 75% of his passes.

Pass Protection: That means you, Steelers’ offensive line. Roethlisberger was sacked just once and the fumble had a lot do with the the New York Jets’ coverage (and maybe a route running issue by the Steelers). The Jets’ front four was easily their best unit and though they kept the run game in check, Roethlisberger routinely had several seconds to throw. He didn’t even need to leave the pocket and extend the play. Just sit, progress, throw, score.

Specifically, kudos to Chris Hubbard for stepping up. I’m sure he got a lot of help but for the team to be on their third string tackle and barely be noticed, it’s impressive.

Le’Veon Bell: He’s the ultimate weapon. The Jets bottled up the run, as you figured they would, but that didn’t stop Bell. He was routinely an underneath option, I won’t even call it checkdown because that implies a last resort and Bell is anything but. He caught nine passes today, a career high, and had more yards through the air than he did on the ground.

It’s another reason why Roethlisberger was so clean today.

Jordan Berry: When the game hung in the balance, which was really for about 50 minutes of this one, Berry was at his best. He pinned the Jets inside their 15 on all three punts and had a long of 52. Of those three drives, New York scored just once, a measly field goal.

His directional punting has been one of the league’s best all season and an underrated reason why this team succeeds. Even when defenses get Pittsburgh’s offense off the field, they’re still fighting an uphill battle to respond.

Anthony Chickillo: Easily his best game on defense. A sack/forced fumble and got some penetration against the run, too. That sack was well-earned too, beating right tackle Ben Ijalana on a three man rush. He finished the day with three total tackles.

Jarvis Jones: We know, we know. He’s probably never even going to be a five sack guy. But he does everything else well and showed that today. Run defense. Backside pursuit. Recognition, including an at-the-net volleyball swat on one occasion.

He was even credited with a pair of quarterback hits and came inches from recording his first sack late in the game.

Mike Mitchell: Said it before and I’ll say it again. You can’t really quantify the impact he has as the middle of field enforcer. Monster hitter, that was on display today, and he was just as active against the run. Officially ended the day with seven tackles, five solo.

Darrius Heyward-Bey: Not that he did anything wrong but it’s clear he was not remotely part of the gameplan today. He barely saw the field, even in the middle of Coates’ struggles, and Markus Wheaton routinely played ahead of him.

You can say ditto about DeAngelo Williams, who saw time early but was barely part of the offense the rest of the way. He finished with just one carry.

Neither of those guys care, at all, I’m sure, but it’s not like there were any clear losers today.

Fake FG: I don’t want to put anything on a coach for a singular playcall so I’ll just reference the play. Yeah, that was the dumbest thing ever and I don’t defend it one bit. Jordan Berry is not that great of an athlete, even as a former rugby player, and you’re banking on him being able to run it.

The dude literally can’t throw. He once did a punt-pass in college because he told his coach he was more comfortable “passing” the ball off his foot than he was trying to throw it with his arm. Very one-dimensional playcall with the maybe the worst athlete on the field.