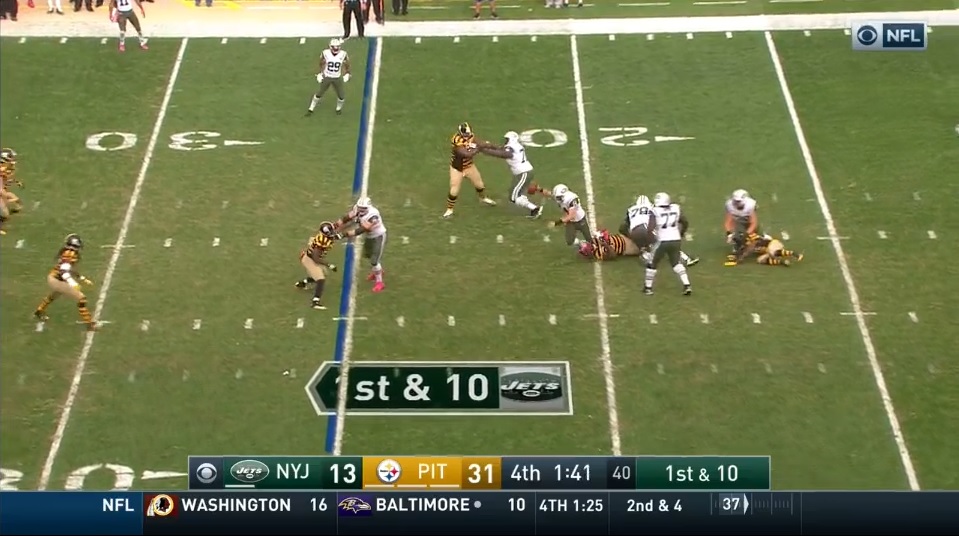 All things considered, Week 5 against the New York Jets was a great week for the Pittsburgh Steelers in nearly every facet of the game.

One area that really took a major leap was the tackling by the defense, which had a rough go of things in that department to start the year.

Total missed tackles against the Jets:  8

Based on the eight missed tackles from Sunday’s game against the Jets, it was a solid performance across the board from a banged-up defense.

Ross Cockrell drew the tough task once again of trying to shut down the opposing team’s No. 1 receiver. This week it was Brandon Marshall, and Cockrell certainly held his own.

Against Marshall, Cockrell didn’t allow a catch over 20 yards and missed just two tackles against a powerful receiver. Cockrell’s missed tackle weren’t very notable, so I won’t spend time looking at them because they didn’t go for big plays.

What I really want to look at though were the missed tackles on sack attempts by both Stephon Tuitt and Ricardo Matthews. The Steelers got to Ryan Fitzpatrick three times on the day, but they should have had five in the win as both Tuitt and Matthews got hands on Fitzpatrick but just couldn’t finish the play.

At the snap, Tuitt cleanly beats New York right tackle Ben Ijalana and tight end Kellen Davis to get a clean run at Fitzpatrick in the pocket.

By getting such a free run at the QB, Tuitt goes just a bit too far up the field in the pocket, allowing Fitzpatrick to climb the pocket quickly, forcing Tuitt to lung and get a hand on his hip.

That’s not going to be enough to get a guy like Fitzpatrick on the ground.

This type of play from Tuitt isn’t the first time I’ve seen this from him. It’s almost like he’s caught off guard as to how easily he gets into the backfield at times and can’t slow himself down to take the right angle to the quarterback.

Fortunately for Tuitt, the missed sack didn’t come back to hurt the Steelers on the play. In fact, one play later Lawrence Timmons and Arthur Moats teamed up to sack Fitzpatrick.

Later on in the game Ricardo Mathews had ahold of Fitzpatrick’s leg in the pocket but couldn’t finish the play with the Steelers up 31-13 late in the fourth quarter. Vince Williams got a hand on Fitzpatrick as well.

At the snap, the Steelers front seven is able to pin their ears back trying to get to Fitzpatrick in the pocket with a big lead and very little time left in the game.

Mathews has to work around James Carpenter and then Ryan Clady before finding himself in the pocket with Fitzpatrick stepping up towards him due to great pressure from Williams on the blitz.

It appears as if Williams is off balance before falling while trying to bring down Fitzpatrick, but with Matthews he has a clean shot at Fitzpatrick and simply can’t finish the play.

Credit to Fitzpatrick though, as the veteran kept fighting in the game and showed good lower body strength to step through those sack attempts.

Overall, Sunday was a really good performance from the defense in terms of scoring, yardage and solid tackling. If they can continue to build off of this performance and start to put together consistent performances week after week, the Steelers could be a dangerous team that nobody wants to play down the stretch.