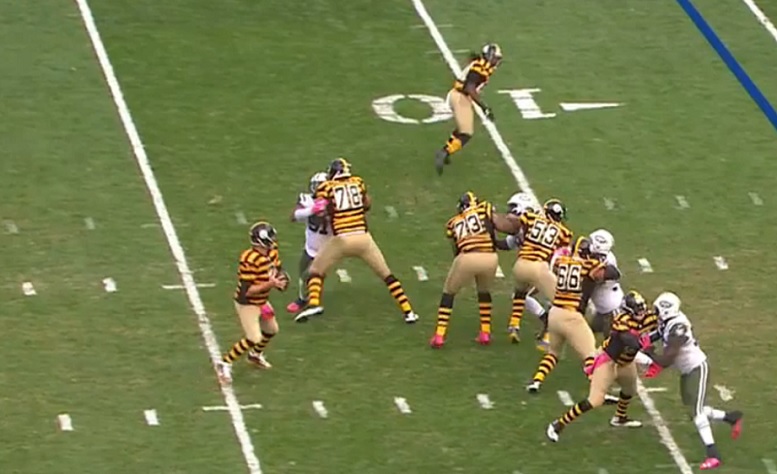 “Got to recognize guys like Hubbard, who stepped up and played and started at right tackle for us and did an excellent job,” Tomlin said.

Steelers center Maurkice Pouncey also talked about how well Hubbard performed in the locker room after the game was over.

“He’s been here a long time; he’s been here for years. Established guy, just didn’t get a lot of time to play and he went out there and played today and he showed all of you,” Pouncey said. “He did a good job.”

Hubbard, a former undrafted free agent out of Alabama-Birmingham, also talked about his first career start after the game and how he felt right at home at right tackle.

“I feel comfortable at tackle,” Hubbard said. “I played it in college, that was one of my main positions.”

While you would think that Hubbard would have received a lot of help in the game against the Jets when it came to pass protection, that wound up not being the case at all. In fact, after going back through Sunday’s game, Hubbard was really only helped twice by tight ends on passing plays and on both the help he received came in the form of a minor shove. That was it.

The Jets have a solid front-four that includes Muhammad Wilkerson and Sheldon Richardson, but both players failed to get any real pressure on Steelers quarterback Ben Roethlisberger on Sunday and Hubbard deserves most of the credit for that. In fact, the Jets managed just one hit on Roethlisberger all game and defensive lineman Leonard Williams was responsible for it as he strip-sacked the Steelers quarterback with 9:44 left in the fourth quarter after getting past tackle Alejandro Villanueva.

After the game was over, Steelers guard David DeCastro admitted that protection was often times swung away from the right side.

“I think we even had more slides away from us,” said DeCastro. “To be honest, I think he held up really well.”

Hubbard was forced to make his first career start Sunday due to starting right tackle Marcus Gilbert having to miss the game against the Jets due to a left ankle injury that he suffered a week ago in the team’s Sunday night win over the Kansas City Chiefs. Additionally, Gilbert’s backup, veteran Ryan Harris, was also injured last Sunday and was ultimately placed on the team’s Reserve/Injured list on Saturday.