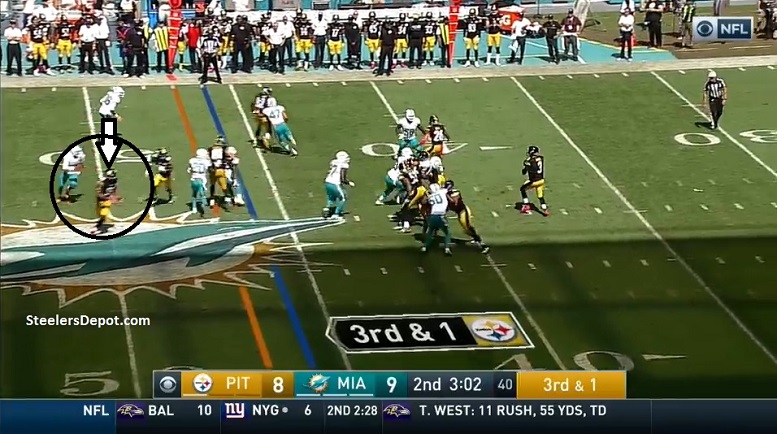 On Tuesday, Pittsburgh Steelers head coach Mike Tomlin made several references during his weekly press conference to his team losing the time of possession battle in Sunday’s loss to the Miami Dolphins and how that played a big part in the game in addition to quarterback Ben Roethlisberger throwing two interceptions.

Because of his time of possession comments, Tomlin was asked if the team should start using running back Le’Veon Bell more as ball-carrier moving forward to perhaps help the offense possess the football longer and especially being as Landry Jones will have to start this Sunday at quarterback being as Roethlisberger won’t play due to his left knee meniscus needing to be repaired on Monday.

“Perhaps and that’s our intention always,” Tomlin said. “We lost our personality a little bit some as that game unfolded because of the lack of possession or the total number of snaps. That balance that you speak of is what we seek, but we didn’t establish a lot of rhythm in that football game because of our inability to execute and convert third downs and we turned the ball over some which has been uncharacteristic of us.”

One of those third downs against the Dolphins that the Steelers offense should have easily converted came late in the second quarter with Jones in at quarterback. The Steelers faced a 3rd and 1 near midfield with just under 4 minutes remaining until halftime and instead of letting Bell run the football, offensive coordinator Todd Haley decided to get cute and have Jones throw to tight end David Johnson out in the flat after he had lined up initially as a fullback.

The Dolphins weren’t fooled at all and the forced pass fell incomplete down the right side of the field and the Steelers were forced to punt. Bell, by the way, just had 3 nice runs to the right side at the start of that offensive possession in addition to not getting stuffed all game up until that point.

Even though the Steelers were only trailing the Dolphins 16-8 entering the second half, Bell only carried the football twice during the final 30 minutes of the game. In should be noted, however, that Bell was given the football one other time during the team’s first offensive possession of the second half but that run was wiped out by a holding call. Regardless, that’s pretty much inexcusable and even more so when you consider that Roethlisberger played the entire second half with a torn meniscus in his left knee.

Even when the Steelers were down 23-8 with 1:45 left in the third quarter, Bell should have been given the football a little more via runs in the fourth quarter in an effort to keep the Dolphins honest. Instead, Roethlisberger threw on every play in the fourth quarter.

Sunday at Heinz Field, the Steelers will host the New England Patriots with Jones starting at quarterback for the injured Roethlisberger. As I stated a few days ago, even though the Patriots will likely be expecting the Steelers to hand the ball off to Bell quite a bit throughout the game, the offense needs to try to establish the run early and get Jones in as many short 3rd down situations as possible.

So far this season, the Patriots have only allowed 3.7 yards per carry on running plays, but with that said, they can be run on up the middle and to the left side of center as that’s where they seem to be the weakest in the games of theirs that I have watched.