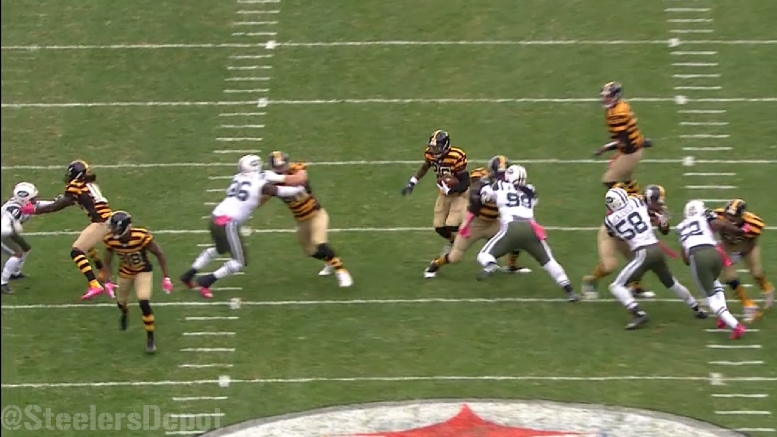 Last week, of course, the Steelers were forced to call upon the services of first-year offensive lineman B.J. Finney while ostensibly their top interior reserve lineman, Cody Wallace, continues to recover from a knee injury that he suffered over the course of the preseason.

Starting left guard Ramon Foster suffered a chest injury at some point during the second game of the season against the Bengals. He tried to play through it the following week against the Eagles, but was forced to check out of that contest late in the second quarter.

Finney stepped in to fill Foster’s shoes for the rest of that game, and then he stepped in to start the following week, but even that almost didn’t happen after he got his finger a bit mauled when it got caught in the facemask of an opponent.

He left practice that day on Thursday, but got himself taped up and was back in practice the next day, in line to make his first start a couple of days later. And he put in a very solid performance, arguably, perhaps, the best performance of the entire line during the game, which I broke down in a film study on Friday.

Likewise, yesterday, the early returns and initial analysis suggest that Hubbard put together a very solid day for the Steelers at right tackle. At least one site, as we noted after the game, had him as the Steelers’ highest performer on the offensive side of the ball, though further review by us will bear that out.

Pittsburgh did not have much of a go of it on the ground, as they did last week, because they gained just 61 yards on 24 plays, averaging 2.5 yards per carry, but the pass protection on the day was excellent, as Ben Roethlisberger was hardly touched throughout the game, outside of a late sack that was partly his responsibility due to the fact that he held on to the ball for so long.

Roethlisberger completed 34 of 47 passes for 380 yards on the afternoon, including four touchdown passes, and his accuracy rating was actually much higher than that when you factor in the number of passes that were dropped, or which simply could have been caught and were on target, but which were not caught.

Credit must be given to the offensive line for allowing the passing game to execute with such efficiency on the day, and there was very little pressure coming from the Steelers’ right side on offense throughout the course of the game. I think that Hubbard opened a lot of eyes and won himself some new fans yesterday. But Pittsburgh is just grateful to have gotten some strong performances from deep within their roster.