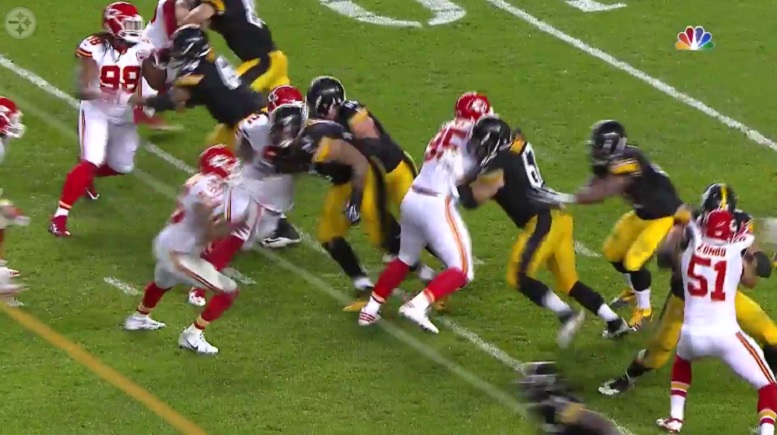 Former undrafted free agent offensive lineman B.J. Finney made his first career start Sunday night for the Pittsburgh Steelers in their blowout win over the Kansas City Chiefs and the Kansas State product represented himself well at left guard. After the game was over, Steelers quarterback Ben Roethlisberger talked about Finney’s play Sunday night in the big win.

“I was proud of the way he stepped up tonight, ” said Roethlisberger. “I’m not going to tell him how proud I am because we need him to keep playing well, but he’s a guy that’s a grimy, tough – I saw him get down on a screen on one of the first plays of the second half, he’s 10 yards down field, cut the guy. He’s a very passionate football player, a passionate person, and it shows in his play.”

Finney was forced to make his first career start Sunday night due to starting left guard Ramon Foster missing the game due to a chest injury that he suffered last Sunday. While Finney’s play Sunday night against the Chiefs wasn’t perfect, the fact that you hardly noticed him outside of a few great blocks is certainly a positive thing and something to build on moving forward.

It’s currently unknown as to how long Foster will continue to be sidelined so there’s a good chance Finney will have to start again next Sunday in the Steelers home game against the New York Jets.

Finney spent most of his 2015 rookie season on the Steelers practice squad and made the team’s 53-man roster this year out of training camp.