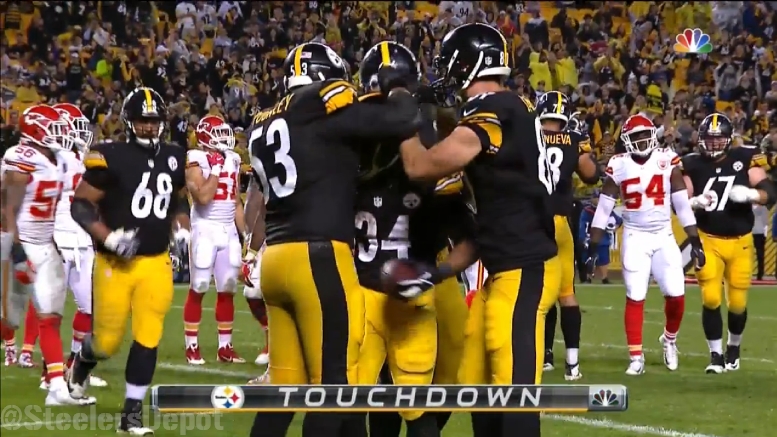 What is the perfect antidote to get over a blowout loss hangover? Why, a blowout victory in response, of course, and that is precisely what Dr. Ben Roethlisberger prescribed for the Pittsburgh Steelers last night, whose team beat the Chiefs nearly as badly as the Eagles beat them the week before.

And, to be quite frank, much, if not most, of the Chiefs’ damage was cosmetic in nature, beautifying an ugly performance when the result of the contest was already well in hand. Both of their touchdowns, for example, came in the last 12 minutes of the game—the second one coming literally in the waning seconds—when Pittsburgh had already amassed 36 points.

And they added a sixth touchdown, this time on the ground, in between Kansas City’s two, which by that point of the game was coming against pretty soft coverages. The first touchdown even came on a drive that started on the Steelers’ 47-yard line following Jordan Berry’s lone poor punt of the night, a 38-yarder from Pittsburgh’s nine-yard line.

So much of what the Chiefs were able to do successfully on the night, as a matter of fact, came in the fourth quarter, or in the late stages of the third quarter, that it would be unfair to judge the team’s overall defensive performance without taking into consideration the in-game circumstances of playing with a virtually insurmountable lead.

Four of Kansas City’s third-down conversions—of eight total—game late in the game, as did their two successful of three fourth-down attempts. A large portion of Alex Smith’s 287 passing yards also came at that time.

Everything seemed to be going right for a good portion of the game. even Kansas City’s punter struggled, with a shanked punt and then a touchback. Their kicker missed a field goal after the holder was unable to pull down a slippery ball off a high snap. And they even got tackled at the two-yard line on a kick return.

The Steelers had positive contributions in every aspect of the game. And outside of a late 46-yard run, the run defense was very solid throughout the day. Meanwhile, Pittsburgh was able to finish the game with Ben Roethlisberger on the sideline, which is always a wonderful sight when it’s not due to an injury or a blowout loss—which he usually doesn’t come off the field for anyway.

Oh, and the Steelers even got turnovers! And sacks! Cameron Heyward in particular was stellar. He recorded three sacks, and his tipped pass early in the game led to an interception that set up the offense with first and goal, which they quickly turned into seven points.

The defense also recovered a fumble prior to that, and were able to deposit that in for points as well. It may not have been a perfect game, but it was a perfect response to a Steeler Nation that was beginning to doubt this team after one of the team’s worst losses on the modern era.