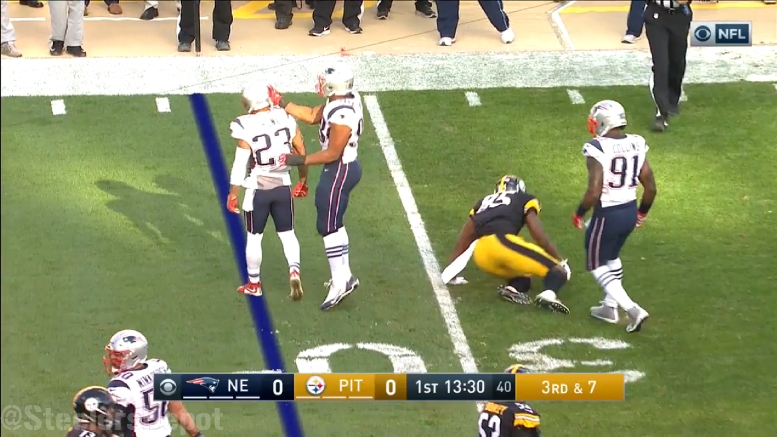 When the Pittsburgh Steelers do get free agent tight end Ladarius Green back from the Physically Unable to Perform List, which increasingly looks like it may come before they play their next game, they will have to make a decision about who to release to make room on the roster.

While there is a handful of candidates for release, mostly among those who can be moved to the practice squad, a lot of the attention is being put on first-year tight end Xavier Grimble, who has played over 125 snaps on the season, including playing extensively on Sunday, almost a third of his total playing time on the season.

Grimble got a number of targets during the game, but he only actually caught two of them, and considering that he seems to be primarily regarded as an athletic, receiving option, I thought it would be of service to take a look at a handful of them.

His first target came on the opening drive of the game, as he lined up in the right slot on a third and seven. After running a not so crisp drag route on which he rounded the edge of the route, Landry Jones delivered the ball behind his body. This caused him to have to reach behind him and slow down just to bring in the ball, which prevented him from having any chance to slip past the defender to get the first-down yardage, so I put this one on the quarterback position.

Grimble’s next target came on the Steelers’ first play of the second quarter, on first and 10. Out of a three-tight end formation bunched to the right, Grimble ran another drag route, but this time Jones’ throw was too far ahead of the receiver, rather than behind, and the ball ricocheted off of his outstretched fingertips. Again, this one is on the quarterback position.

Fast-forwarding to the middle of the third quarter, Jones targeted Grimble once again, this on third and four. The Steelers bunched four players to the right side, with Grimble in the slot, with the tight end running another shallow crossing route. This time, the defender was able to get to the pass on time the defend it away, but his reaction after the play suggests he realizes he could have come back to the ball more and used his body better to box out the defender.

We pause briefly away from the passing game to highlight a block later in the quarter, with Grimble as the in-line tight end in a three-tight end set. The first-year tight end came off the ball and sealed off the inside linebacker on the second level against the run.

There is one more target I want to look at, midway through the fourth quarter, which was once again out of the right slot crossing to the left. On this target, Grimble lost the ball after the defender came in and got his helmet on it, forcing an incompletion.

While he did have a nine-yard reception later in the day, Sunday’s game was a bit of a Murphy’s Law kind of day for Grimble in the passing game. While he did not outright drop any passes, he had one that was thrown behind him, one in front of him, then one that hung too long, allowing a defender to catch up, and then he had a reception knocked out by a helmet.

You can look on the surface and see the catch rate and deduce what you want, but Grimble is a better athlete and receiver than the stat sheet from this game might suggest if you look at the targets and what happened on each play.